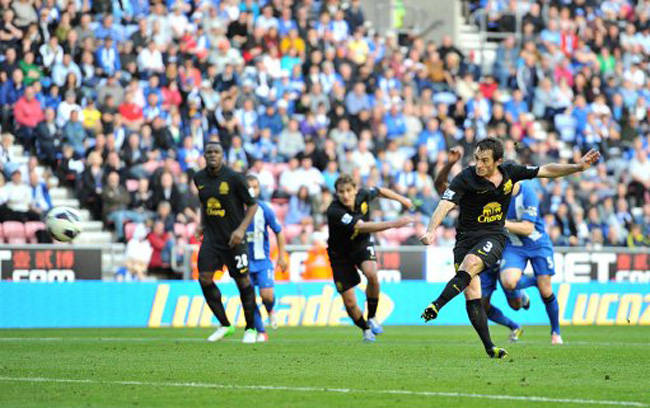 Everton’s superb start to the season looked like coming unstuck at the DW Stadium on Saturday, only for a late Leighton Baines penalty to secure a share of the points for the Toffees.

Everton were far from their best for long periods of the game, with Arouna Koné proving a real handful for the Everton backline. The African hitman opened the scoring on 10 minutes, but Everton level just a minute later, courtesy of Nikica Jelavic. However, the Latics took the lead again soon after, when Franco Di Santo netted after good work from Koné.

After the break, David Moyes’ side pushed for an equaliser and had a number of penalty shouts before Kevin Mirallas was felled by Maynor Figueroa in the box and Kevin Friend pointed to the spot.  Baines fired home to give both sides a share of the points.

Everton stay in the top three while Robero Martinez’s side continue to hover just above the drop-zone.