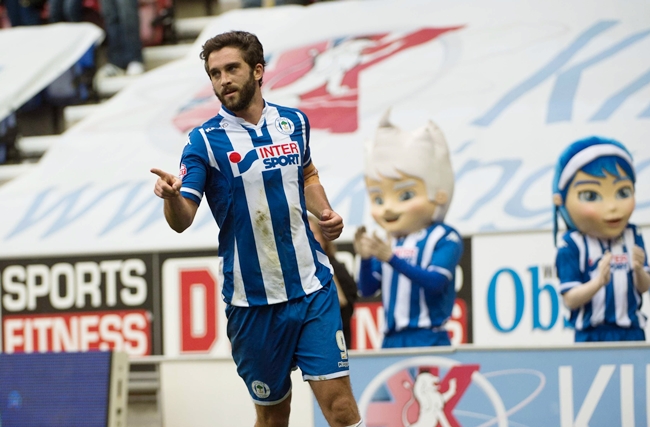 Not so very long ago, a video did the rounds of a group of Wigan fans belting out an ode to top-goalscorer Will Grigg after the striker scored his 27th goal of the season in a 4-0 away win over Blackpool.

Wigan duly went on to tie up the League One title, with the Grigg chant – which borrows heavily from mid-90s Euro dance classic ‘Freed from Desire’ by Gala – quickly becoming a terrace staple at the DW Stadium.

The song is the masterpiece of a Latics fan by the name of Sean Kennedy, a man who has spent a lot of his recent time concocting various odes to Grigg and his goalscoring prowess.

The original chant is tacked on the end of this ‘ere video, along with a Grigg-themed power balled that uses Alicia Keys’ ‘This Girl Is On Fire’ as a foundation.

Indeed, the chant has become so prominent that it has even caught the ear of Wigan chairman David Sharpe, who got in touch with Sean via Twitter to thank him for his contribution to the Latics’ canon and even reward him with a complimentary 2016/17 season ticket for his efforts…

Signed him for his goals but this Will Grigg chant was worth paying money for alone!! Its gone worldwide!!🔥🔥🔥

For inventing the best chant ever known to man, you’ve earned yourself a free season ticket for next season @KennoUTJ. Will Griggs on fire 🔥

We ask you, how bloody fantastic is that?