Pep Guardiola’s aspirations of winning a third career quadruple came to a shuddering halt in Wigan (of all places) last night, as a single goal from Will Grigg was enough to send all-powerful Man City floundering out of the FA Cup at the fifth-round stage.

However, the shock scoreline was just the tip of the iceberg on what proved to be an aggro-fuelled night at the DW Stadium.

The Latics made a decent fist of holding their own against near-constant City pressure in the opening 45 minutes until their task was made just that little bit easier seconds before half-time when Fabian Delph got himself sent-off in controversial circumstances.

Delph flew into a brawny 50/50 challenge with Max Power, came away with the ball but was punished for being “out of control” by referee Anthony Taylor after the City man’s leading leg was deemed to be too high.

Just to complicate matters, Taylor appeared to approach Delph with his yellow card drawn, only to change his mind and flash the red at the insistence of a group of mithering Wigan players… 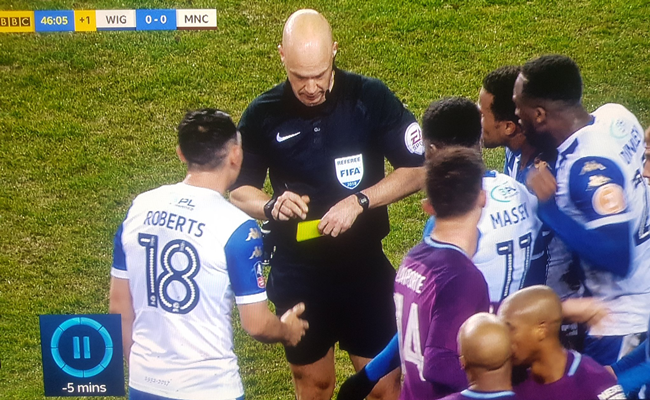 Quite understandably, this incensed Guardiola, who immediately voiced his displeasure to anybody who would listen, leading to the City boss becoming embroiled in a lively conversation with his Wigan counterpart, Paul Cook.

Indeed, the spirited repartee continued as the pair made their way down the tunnel as the cameras caught it all, with the two sparring coaches eventually having to be separated by none other than Peter Reid, acting as peacemaker.

A game of football then resurfaced 15 minutes later, with City beginning the half with refreshed vim and vigour only for Wigan to continue to threaten on the counter-attack hither and thither.

Sure enough, it was a whip-smart breakaway that saw Grigg cut inside from the left, twist Kyle Walker up and slot a lovely finish past Claudio Bravo in the 79th minute…

The Latics then held on to become the first ever team from a lower division to inflict a defeat on a Pep Guardiola team… ever.

The result also means that Wigan have now beaten Man City in all of the last three FA Cup meetings between the two sides: the 2013 final, the 2014 quarter-final and Monday night’s fifth-round extravaganza.

However, the joy inside the DB was tempered by ugly scenes after the final whistle, with fans storming the pitch as Sergio Aguero got himself caught up in an ensuing altercation.

Indeed, the Argentinian was seen to lash out at a fan, though according to journalist Jose Alvarez, the Argentinian striker had good reason to be aggravated amid claims he was slapped on the head and spat at.

Slowed down + zoomed in version of Aguero incident (LQ).

Aguero swarmed, gets hit on head, Chey Dunkley notices + heads over. Bloke in green jacket walks directly up to Kun and gets right up in his face.

While Wigan supporters were busy baiting City players (as Oasis played over the stadium PA system), some of the travelling fans in the upper tier decided the time was right to start tearing advertising hoardings from their moorings and hurl them, about as well as lobbing coins down at the Wigan fans who were goading them down below.

The romance of the FA Cup is obviously still alive and well.