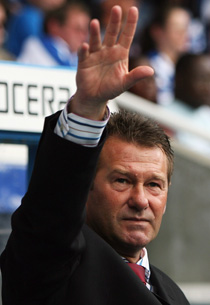 He was the bookieâ€™s favourite to go next so itâ€™s no great surprise that Wigan have shown Chris Hutchings his P45 after the clubâ€™s sixth defeat in a row against Chelsea on Saturday.
Wigan actually got off to a good start and we seem to remember them briefly topping the table at the beginning of the season â€“ but they havenâ€™t won a game since August 18th against Sunderland, which has now left them in the relegation zone.
It was always going to be difficult to replace a miracle worker like Paul Jewell at the JJB Stadium and Hutchings cause hasnâ€™t been helped by injuries to key players like Emile Keskey, Danny Landzaat and Mario Melchiot.
Assistant manger, Frank Barlow, will come in as a caretaker manager for Sundayâ€™s six pointer against Spurs while the search for a new manager begins. Weâ€™re not sure that Wigan have the players to stay in the top flight â€“ do you know a man that can help them or will they be playing in the Championships this time next year?