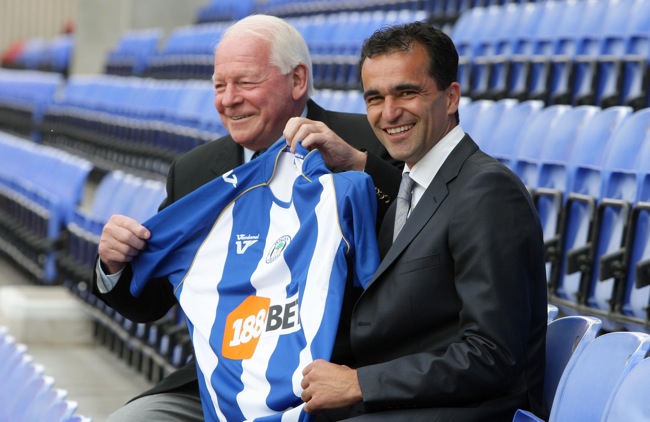 At Wigan, Dave Whelan has built a (successful) local club for local people

Remember that child you begrudgingly were forced to spend a lot of time with as a kid because your parents were both good friends? They normally made everything rather sticky, had a series of pills they had to take at regular intervals and splashed an astonishing amount of urine outside of the toilet bowl. In my mind, this rather inappropriate analogy represents Wigan Athletic, a club it seems just to fill up the numbers of the Premier League. Nobody cares about them, they’re generally last on the Match of The Day highlights, and even their supporter turnout looks more like a private function for a Lancashire teenager’s birthday, whose one wish was for him and all his friends to watch some pretty mediocre football at a reasonable price.

Most people it seems would be indifferent to seeing Wigan get relegated from the Premier League, and yet like a spider in the bath, they’re still there, hanging on for dear life with almost everyone wanting it removed – and yet no one can be bothered to get round to it.

This feeling of indifference however makes Wigan seem all the more remarkable. They’ve been a topsy-turvy rollercoaster of fun since the beginning of their time in the Premiership, and like any good rollercoaster, there is one massively tedious queue before the ride. The Paul Jewell era had the wonderful early-season rocket to the top of the table, capturing the possibility of a place in Europe and maybe even a place in our hearts, before imploding and sliding down the table and using only their pre-Christmas fat reserves to keep them from the dirty paws of the bottom three. The Steve Bruce era was brief yet beautiful; who amongst us wasn’t cheering on Antonio Valencia and Amir Zaki, as we felt deep down that his Golden Generation was destined for greater things (Manchester United and Israeli death threats as it turns out)

The current Martinez era seems incomparable with any other side in a major league in Europe. The shocking inconsistency in their results as seen in the last one-and-a-bit seasons has turned them into the Mr. Unpredictable of the Premier League. Spanking Chelsea 3-1 at the DW and Tottenham 1-0 at White Hart Lane is all the more impressive considering they lost 8-0 and 9-1 respectively in the space of a year. And lest we forget that 3-2 win against Arsenal (see video below) – had Spurs or United done it we wouldn’t hear the end of it, and yet Wigan has yet to release a DVD called “The Miracle of the DW” with a special banner permanently hung above the Titus Bramble Suite.

The rag-tag nature of the team has created something of a Marmite feel amongst neutrals towards Wigan F.C. On the one hand they may be extremely symbolic of the dark side of modern football. They are very much a money success story. You can point towards Chelsea and now Manchester City as benefitting from a gigantic cash injection, but neither has truly been revolutionised quite like Wigan. They are a team comprised mostly of foreigners and have no local heroes, no stories of big cup games spoken in hushed tones by elderly legends who remember the glory days. These are Wigan’s glory days, and we shouldn’t forget it.

Their transformation from floundering in the northern leagues to being in the top-tier of English football in less than 10 years can only be described as incredible, and all because Dave Whelan had a dream. It is good to see a local lad who knows his way around football take his hometown club to the top. That’s the way people want it, and that’s the way Wigan do it. Giving players from the lower tiers of English football and the Central American leagues a chance to prove their worth to a half-empty stadium against Stoke isn’t glamorous, or often good to watch, but they try hard to play attractive football (which I’m fully aware is an extremely pretentious and patronising thing to say, but it’s true).

So let’s give it up for Wigan. They are owned by a local businessman, managed by a former player, and attempt to develop young and obscure talent, with one aim in mind: to try and battle for a place just above the relegation zone. They have some of the cheapest ticket prices in all of English football and occasionally have some truly hilarious scorelines. Not much hyperbole has been dished out about Wigan in its short history, but I hope there will be more. I’d hate to see them relegated – they have entertained me no end, and if I had a beard to stroke, I would say that’s what football is all about.