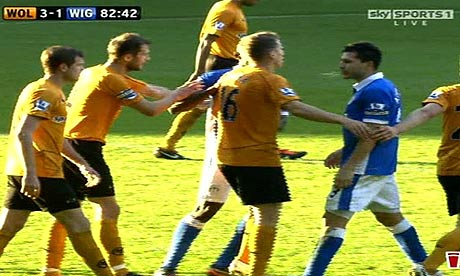 Caught in the act: the offending spit in action

Poor old Roberto Martinez is having a hard old time of it. Not only does the doe-eyed Spaniard have to find a way to wake his underperfoming Wigan side from its early season coma, but he now has to deal with the likely suspension of his Paraguayan defender Antolín Alcaraz.

The centre-half was caught on camera spitting at Wolves defender Richard Stearman at the weekend, and although referee Lee Probert missed the incident, the FA have now stepped in. The South American has three days to appeal but the likelihood is that he’ll cop a three-match ban.

Spitting is of course a disgusting, disrespectful act, but the moral outrage at the offence, which, according to most pundits, seems to be the moral equivalent to beheading an opponent and then defecating on his remains, is surely way over the top. Indeed, a dangerous, high, two-footed tackle, which could end a player’s career, is usually treated with far more understanding. Just ask Alf Inge-Haaland or Aaron Ramsey which they’d have preferred, to have Roy Keane/ Ryan Shawcross just spit at them, or break their leg?