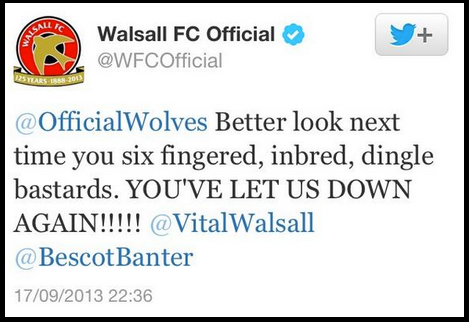 Walsall have been forced to issue a full and frank apology to Wolves and their supporters after their Twitter account appeared to brand them “six-fingered, inbred, dingle bastards” following the derby game between the two sides in League One last night.

The Saddlers pulled off a shock 1-0 win at the Bescot and minutes after the final whistle, the offensive Tweet above was posted on the club’s official Twitter account where it remained for several minuted before being deleted.

“Walsall Football Club would like to apologise unreservedly to Wolverhampton Wanderers and their supporters for the offensive Tweet that appeared on the club’s Official Twitter Page last night.

“Our Official account was hacked at 22:36 last night and a derogative and frankly disgusting Tweet was published. As soon as the club’s Communications Team, who were at Molineux for the fixture, were made aware of the Tweet, it was deleted and an apology issued.

“Walsall Football Club are taking this matter very, very seriously. A full investigation will be launched.

“Walsall FC do not condone this type of behaviour and when the culprit is identified the club will be taking the strongest course of action.”

First things first; is “derogative” a real word? It doesn’t quite look right. Second things second; this definitely looks like the handiwork of the ARCHBISHOP OF BANTERBURY #epiclolz