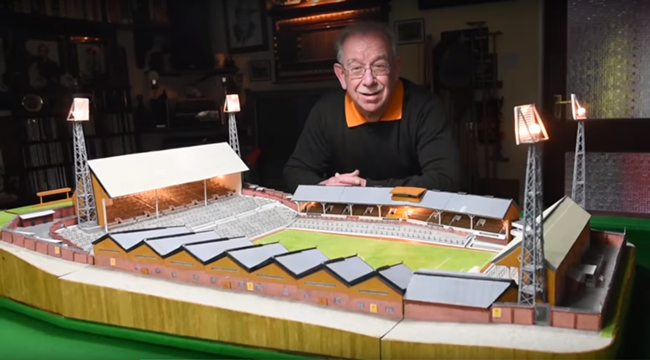 The man you see before you is Chris Jepson, a football fan who has poured approximately 500 hours of his life into a remarkable labour of footballing love.

The 4ft by 2ft model is based on the stadium as it looked during Wolves’ golden (no pun intended) era – the late 1950s and 1960s – and is constructed almost entirely from wood, mostly lollipop sticks and matchsticks, with the odd bit of rabbit hutch wire deployed hither and thither.

Here’s the guided tour, courtesy of the man himself…

The detailing really is superb. The working stadium lighting is impressive and even the old ‘Wolves lottery’ office is included.

Speaking to the Express & Star, Chris revealed he used “40 or 50” Wolves reference books to make sure every detail was painstakingly captured.

I always loved the old Wolves stadium. It fascinated me – it was unique.

All the really good times happened then – championships, cup wins, European matches under new floodlights and atmospheres beyond belief.

I’m quite proud of [the model]. People that have seen it think it’s wonderful.

Having recently been given the all-clear himself, Chris is hoping to auction off his mini-Molineux to raise money for cancer charities.

I want to auction it off to give something back to those who have helped me.

I’ve been through hell and back in the last few years with cancer and operations related to it.

I’ve got no idea of valuation. I have spent quite a bit of time on it and a bit of money.

Here’s wishing Chris the very best. Whatever his model ends up fetching, it’s most definitely worth every single penny.

Many thanks to Pies fan Dom Huxley (@domhuxley) for the tip-off.