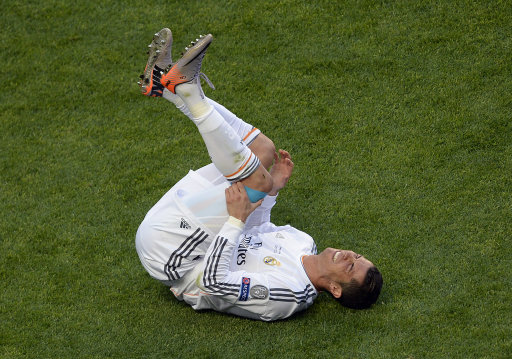 A witch doctor from Ghana has claimed responsibility for causing the knee injury that is currently putting Cristiano Ronaldo’s World Cup participation in doubt.

As well as a pesky muscle problem in his left thigh, Ronaldo is suffering with ‘patellar tendinosis’ in his left knee – an injury which Nana Kwaku Bonsam (whose name translates as “Devil of Wednesday”) claims he foresaw as far back as February.

Nana Kwaku, who conducts his business at the Kofioo Kofi shrine in Kumasi, predicted that Ronaldo would miss the tournament due to an injury and also claims that the Portuguese superstar’s ailments can’t be healed by doctors, telling local radio station Angel FM:

“I know what Cristiano Ronaldo’s injury is about, I’m working on him. I am very serious about it.”

“Last week, I went around looking for four dogs and I got them to be used in manufacturing a special spirit called Kahwiri Kapam.

“I said it four months ago that I will work on Cristiano Ronaldo seriously and rule him out of the World up or at least prevent him from playing against Ghana and the best thing I can do is to keep him out though injury.

“This injury can never be cured by any medic, they can never see what is causing the injury because it is spiritual.

“Today, it is his knee, tomorrow it is his thigh, next day it is something else.”

Right, someone fetch us the innards of a freshly slain goat. We got this.