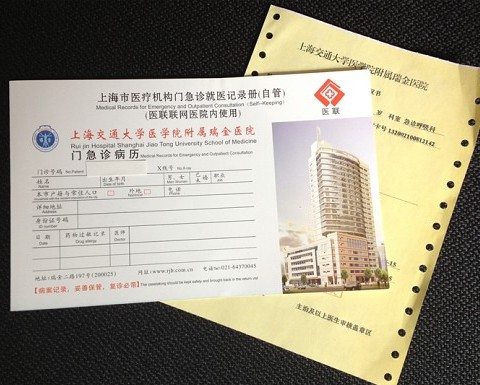 According to the Telegraph, hundreds of Chinese workers are spending up to 300¥ (approximately £30) a pop on buying counterfeit hospital sick notes in order to bunk off work and watch World Cup matches.

Due to the 11-hour time difference between China and Brazil, many World Cup fixtures are scheduled to kick-off at 3am local time, leading many football fanatics to hit the black market in order to get their fix.

Fraudsters have flooded Taobao (the Chinese equivalent of Ebay) with the fake notes over the past few weeks, with prices varying from 1¥ (about 1 pence) for a pad of fake doctor’s sick notes right up to 300¥ for a top-of-the-line stamped hospital record sheet, as seen above.

The Telegraph actually had one of their staff journalists purchase a hooky sick note, reporting:

“For 100¥, the Telegraph acquired a sick note allowing this correspondent to skip his Sunday shift after watching England’s opening match against Italy on Saturday June 14th.

“The apparently legitimate note and accompanying medical record purport to be from the respiratory department at Shanghai’s Ruijin Hospital, one of the city’s best.

““Diagnosis: upper respiratory tract infection. Suggestion: one day of sick leave,” reads a dark blue scrawl on the document, alongside no less than four official-looking stamps.

“Dated June 15th, the note was actually produced more than a week earlier by fraudsters from a company called Shanghai Sick Notes.”

Call us old school, but exactly what’s wrong with the old 9am croaky-voiced phone-call technique?