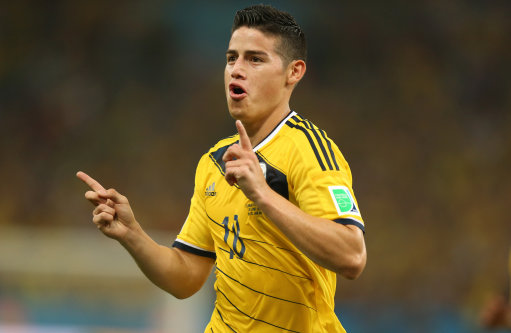 As part of his World Cup blog over on the Kick It Out website, ITV commentator Clive Tyldesley has explained the reasoning behind his huge decision to not pronounce James Rodriguez’s name properly throughout the tournament so far.

Despite the world and his dog now knowing that Rodriguez’s first name should be pronounced “Hamez”, Clive ain’t playin’ ball for fear of confusing us simple Brits.

It’s all a little bit self-important and pompous, but our Clive loves nothing more than to labour under the misbelief that he is a humble yet indispensable thread in the rich tapestry of the English football – so that’s probably to be expected.

Under the headline “TO JAMES OR NOT TO JAMES? THAT IS THE QUESTION”, Tyldesley writes:

“Nothing that I do or say on air creates more Twitter traffic than pronunciations. On Friday night, James Rodriguez will again take to centre stage at this wonderful World Cup. I will call him ‘Jaimz’, others will call him ‘Hamez’. By now, I think we all know who he is.

“I am in the identification business, I am not a linguist. Recognising more than seven hundred players at a World Cup makes for an interesting investigation into what identifies us from one another. Colour is the single most important distinguishing feature – skin colour, hair colour, boot colour, wristband colour. Once I have worked out who is who, my job is to try and let the rest of you know.

“Believe it or believe it not, I do try to get pronunciations correct. The football website, Goal.Com, actually has a page on which you can listen to native speakers announcing the names of each of the players involved in this tournament. Listen, learn, rehearse, repeat. Easy! And, yes, in his native Spanish language James Rodriguez becomes ‘Hamez Rod-reeg-ez’.

“The complications and dilemmas come when – like me – you are not a native Spanish speaker, or any other ‘speaker’ but plain English. If some of the most famous of the household names at this World Cup were to be pronounced totally correctly, familiar players like Van Persie, Ronaldo and Luiz would suddenly sound rather unfamiliar.

“So, at the risk of upsetting the multi-linguists, I admit that I do lean towards ‘Anglicising’ names for popular consumption. I believe it is far more important not to misuse words such as ‘tragedy’ and ‘disaster’ in football commentary.

“But pronunciations will continue to divide and infuriate. I remember Ruud Gullit working with ITV as a World Cup panellist and saying that the guttural sound of his surname is simply not one that English speakers make.

“I have steered clear of trying to refer to Belo Horizonte as ‘Bello Horry-zontsscchhh’ because my clumsy attempt at speaking Portuguese would probably still be wrong, so why pretend? The fellow that kept winning Wimbledon in the seventies had a name that actually sounded nothing like Bjorn Borg in Swedish.

“I am also averse to changing players’ names halfway through their careers if possible. When Belgium played England just before the last European Championship finals, both Martin Tyler and I agreed to seek out Eden Hazard and establish the correct pronunciation of his name ahead of his move to Chelsea.

“He informed us in the Wembley tunnel that he was ‘Ay-den Azzar’. By the end of that evening, my @mentions file had been besieged by Twitter followers saying ’why don’t you just call him ‘Haz-ard’. And, do you know, they had a point.

“So I will not be intentionally trying to wind anyone up when I shout ‘Jaimz Rod-reeg-ez’ on Friday. Quite the opposite.

“Personally, I think it would be a little perverse to refer to a man with ‘J-A-M-E-S’ on his back as anything other than ‘Jaimz’ on British television unless a different pronunciation of his name had been long established – particularly as he was happily scoring goals for Porto in Europe two years ago as ‘Jaimz Rod-reeg-ez’ on our channels.

“I can offer one great consolation to anyone who disagrees, and finds me guilty on many counts of butchering words and names… virtually nobody pronounces my surname correctly!”

Interesting – but that’s not really the way it works, now is it Clive?