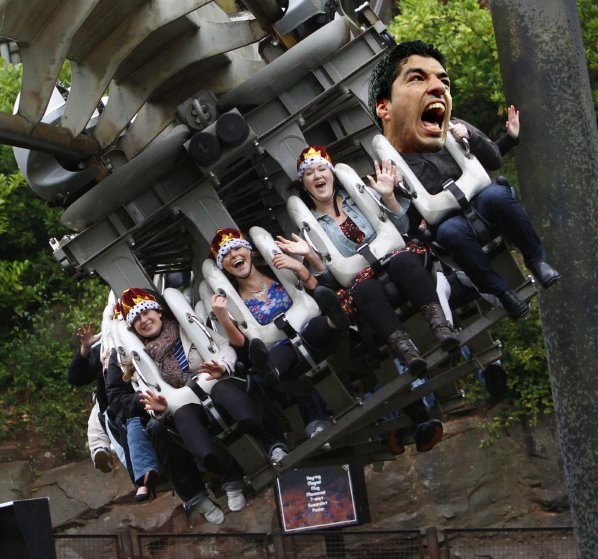 Staffordshire Police have confirmed that they are investigating what has been described as a “Luis Suarez-style” biting incident involving a teenage girl at Alton Towers theme park.

The bite reportedly took place in the queue for the Nemesis, which is just wonderful.

This from the Stoke Sentinel:

“[The victim] Grace Dures was in line for the Nemesis Sub Terra ride at Alton Towers when a man bit her on the shoulder.

“The incident was said to be similar to Uruguay and Liverpool striker Luis Suarez’s bite on Italian defender Giorgio Chiellini at the World Cup, which has seen the forward suspended for four months.

“The teen, from Merseyside, was rushed to the theme park’s medical centre for treatment, and the matter has been reported to the police.”

A spokesman for Staffordshire Police said:

“We received a complaint that at around 4.30pm on Thursday 3 July a 14-year-old school girl whilst on a school organised trip to the Alton Towers theme park was on the Sub Terra Ride when she was assaulted by an unknown male.

“The victim suffered an injury to her shoulder and was taken to the medical centre and given initial treatment by Alton Towers medics before returning home. It is understood that she has received further medical care from her own GP.

“An investigation into the assault has now commenced and officers will be reviewing CCTV evidence from the park to identify the offender, who is described as a white male aged 30 to 40.”

It may well say he’s only 27 on his birth certificate, but we’re sure Luis Suarez could probably pass for 30 in a pinch (or a bite).

Anyway, Grace’s father Gary has told the paper that he’s furious over the incident and that he believes the antics of a certain gnash-happy Uruguayan forward may have had a part to play in his daughter’s attack.

“This whole thing about Luis Suarez has been in the papers,” he said. “It seems a bit of a coincidence.”