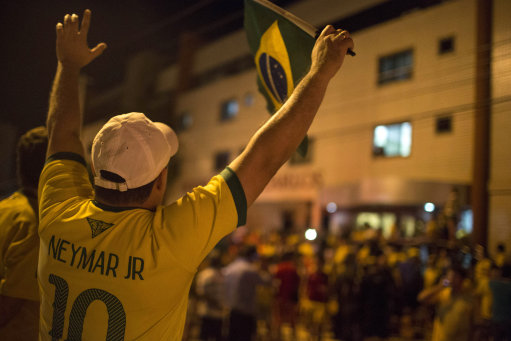 Driven half-cuckoo by last night’s proceedings, a large group of Brazil fans reportedly congregated outside Germany’s training base last night to give Jogi Löw’s victorious side a heroes’ welcome upon their return.

According to the Telegraph, several hundred Brazilian fans adopted a “if you can’t beat them, join them” approach to dealing with the grief, waiting for hours in the pouring rain to cheer the German players as they disembarked their team bus at gone midnight and boarded a ferry for the crossing to their training HQ in Santo Andre.

“We just like the way Germany play – all the creative goals and all the great passing they do,” said Breno Antunes, one of the police officers tasked with keeping an eye over the German players as they switched from bus to ferry.

“If Brazil’s not in the World Cup anymore, at least there’s one team still in it that play like Brazil.”

“I very much like Germany,” added ex-Brazil fan Jose Amilton. “They play so well, they pass the ball and they’re so fast. They play like Brazil used to.”