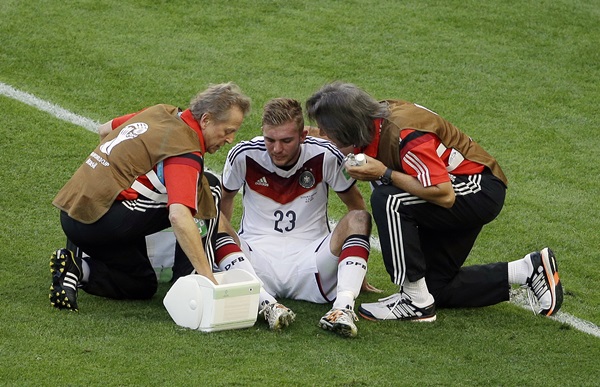 As you may well recall, Christoph Kramer got himself well and truly knocked into the middle of next week during the World Cup Final after a brutal collision with Argentina’s Ezequiel Garay.

Kramer was knocked unconscious for several moments after colliding head-first with Garay’s shoulder, though was eventually allowed to play on after being assessed by the medics on duty until being taken off in the 31st minute after his teammates noticed the Borussia Mönchengladbach man was visibly doolally.

Indeed, several of said teammates – Manuel Neuer, Philipp Lahm and Thomas Muller – appeared on ZDF Sportstudio (a sport/comedy chat show from what we can gather) in Germany on Saturday evening and duly revealed the extent of Kramer’s nasty concussion – with some of the anecdotes proving to be just as harrowing as they were amusing.

“He was fine until I saw him acting strange. Then he came to me and said ‘Manu, let me play as the goalkeeper’.”

“I wasn’t worried at first, he played normally. But things started when he came to me and said he wanted to take the captain band from my arm.

“I thought ‘what’s going on here’. When he wanted to trade shirts with the ref I thought ‘it’s enough now’.”

But then Muller stole the show, revealing that the befuddled Kramer mistook him for Gerd Muller and even congratulated the 25-year-old forward for scoring the winning goal in the 1974 World Cup Final:

“Until now you only know that he asked me if this is the final, but sadly that’s only the most harmless thing that happened.

“He called me “Gerd” and congratulated me on the ’74 final.

“Then, when the crowd was really loud he told me: ‘Great atmosphere here in the Ruhr stadium!’

“It was important that he was subbed off because nobody knows what else he would’ve done – maybe take off the ref’s panties!?”

Bloody hell! That’s grim – though, to be perfectly honest, it’s not entirely surprising that Kramer didn’t have a sodding clue where he was…