After being selected as a host venue for the 2018 World Cup in Russia, the suits at the Ekaterinburg Arena realised that they had their work cut out if they were going to boost the stadium’s capacity to meet the tournament minimum in time for kick-off.

The arena in Yekaterinburg boasted an initial capacity of just 27,000 seats, some 8,000 seats shy of the FIFA tournament minimum which stands at 35,000.

So a plan was hatched by the Russian Football Union to expand the Ekaterinburg Arena into a 45,000-capacity bowl by basically erecting two massive ‘bleacher’ style stand extensions outside the ground… 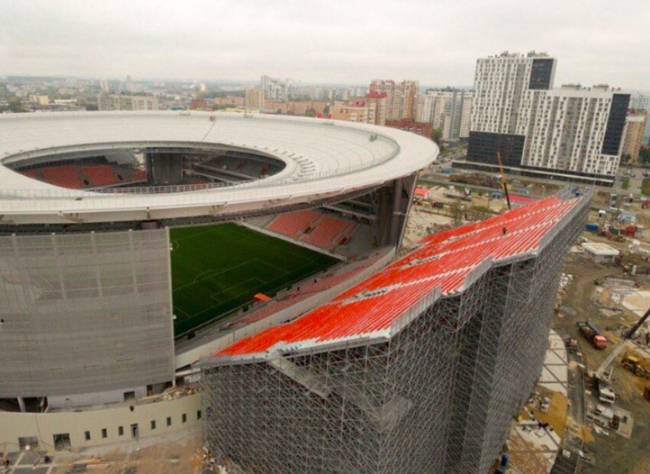 Yep. It looks exactly as insane as it does precarious. Like somebody’s taken a slice from a massive steel gateau.

If you’re already feeling the dizziness starting to set in, just wait until you see the view from the top of the outlying temporary structure…

Nice view from the new stadium in Ekaterinburg that will host the WC next summer. 🤦🏻‍♂️ pic.twitter.com/kdBZ0mHD45

Thanks, but it’s a hard pass from Pies.