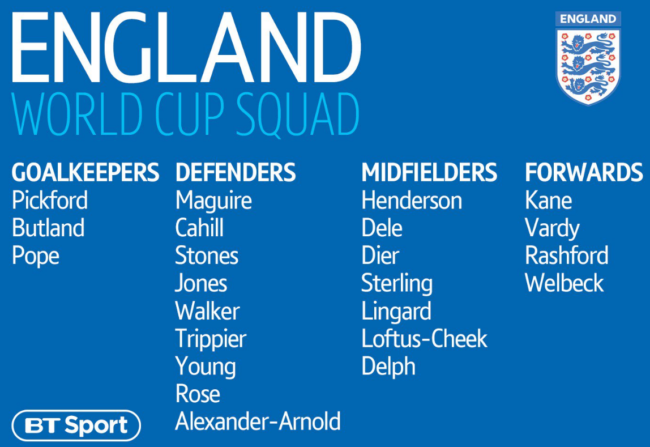 With a mere wave of his hand (and two years of deliberation), England manager Gareth Southgate has now decided on the 23 players he will take to Russia this summer.

Of course, this meant heartache for the souls left behind, but several of those to make the grade have already declared their gratitude and excitement.

After years of you standing on the touch line in the cold and rain, Mum we’re off to the World Cup! 🦁🦁🦁 pic.twitter.com/JOCj5oBCtN

Ashley Young followed suit shortly after, proving that donning an England strip at a World Cup is a dream he’s been harbouring for a fair old while…

Maybe this picture said I was gonna live my dream and go to a World Cup… dreams do come true 👀😊🤘🏾🦁 pic.twitter.com/kSM8VORdp0

Dreamt of going to a World Cup since I was a kid. Today that dream come true, an honour to represent the 3 Lions this summer! 🦁 @England pic.twitter.com/e6c8agtVar

Congrats to these two for making the @England World Cup squad – don’t look so shocked Trent, you deserve it! pic.twitter.com/i3pmYXNEXJ

Nicely done. It’s just a shame he won’t be on the plane with them really.

What an honour! No words to describe the feeling right now….. Can’t wait to get going! See you in Russia 🏴󠁧󠁢󠁥󠁮󠁧󠁿 🦁🦁🦁