Congratulations are most definitely due to Germany, champions of the 2018 World Cup and Weltmeisters two times on the bounce.

Thanks to some advanced econometric stock-picking technology, Swiss bank UBS have been able to ascertain that Jogi Low’s side will emerge victorious out in Russia.

UBS’s algorithms, which are usually used to assess investment opportunities, have found that no nation has a higher chance of winning the World Cup than Germany, who have a likelihood of 24 percent.

According to the bank themselves, the system employed “is not perfect” but they reckon enough key variables have been identified and scoured to give their prediction sufficient credence.

However, it should be noted that this high-falutin’ model has also given Italy a 1.6 percent chance of winning the 2018 World Cup despite the fact that they haven’t actually qualified for it. 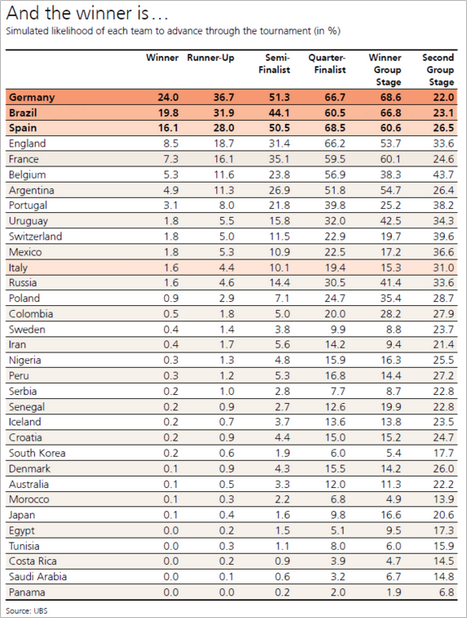 No matter whether they are analysing global markets or soccer tournaments, people tend to be biased towards local favourites.

The same quantitative discipline that the chief investment office applies to investments has proven useful in successfully looking beyond a home bias in portfolios and sports events.

As you can no doubt glean, Brazil and Spain have been installed as second and third favourites, though the UBS findings are well and truly debunked by England washing up fourth in the rankings, with an 8.5 percent chance of lifting the trophy in Moscow.