Germany have named their 23-man squad for the World Cup and the big surprise is that Leroy Sane has been left out.

Jogi Low watched the Man City winger play 67 anonymous minutes of Saturday’s rain-sodden 2-1 defeat against Austria and has decided to axe him thereafter, as well as Jonathan Tah, Bernd Leno and Nils Petersen.

This ‘ere be German World Cup squad in full… 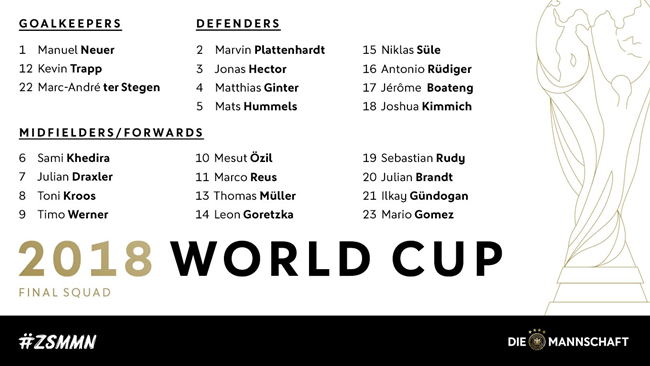 A big thank you for their efforts and commitment from Joachim #Löw to the four players who won’t be going to Russia, @Bernd_Leno, @jonatah, @LeroySane19 and Nils #Petersen 👏#DieMannschaft #ZSMMN pic.twitter.com/ANUjXgOV6Y

That [leaving Sane out] was a very close decision between him and Julian Brandt, which was made in favor of Brandt. Draxler Reus and Müller are set. Leroy has a huge talent.

He will be back again from September. He had not arrived in international matches yet.

While the news may come as a seismic shock to people who have solely watched Sane in the Premier League this season, those who have a passing awareness of the PFA Young Player of the Year’s performances for Germany of late will likely not be totally overwrought.

Low isn’t convinced (at least not yet) and has instead opted for players he trusts implicitly to step up as and when required. It’s what he does, and it’s proven to be successful.

Still, to not take Sane to the World Cup at all seems… a little imprudent.