In his ceaseless endeavour to goad English football fans whenever and wherever possible, Diego Maradona has branded the Three Lions’ win over Colombia in the last 16 of the World Cup as a “monumental theft”.

After pointedly pledging his allegiance to Los Cafeteros on social media before the match, Maradona was hardly backwards in coming forwards after watching his boys go out. 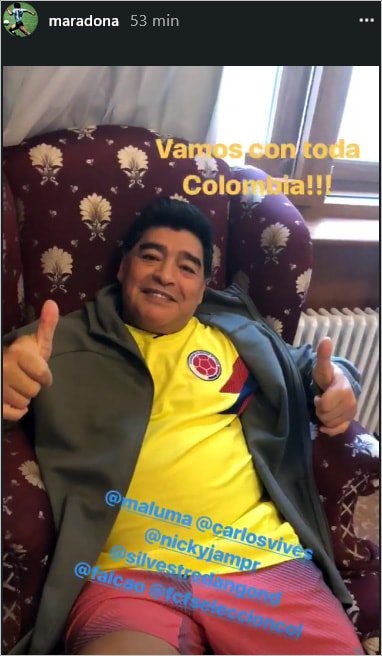 Indeed, the 57-year-old began by addressing what he saw as incorrect decisions, berating US referee Mark Geiger and even implying that the whole thing was rigged in England’s favour.

The penalty was not a penalty – it was a foul by Kane. Why didn’t he (Geiger) use VAR?

I’m reeling because when I spoke to [FIFA president Gianni] Infantino the first time, everything had changed at FIFA: the thieves had left, the fixes, everything.

And today I saw a monumental robbery on the pitch. I apologise to the Colombian people, but the players are not to blame as we don’t choose the referees.

The referees are chosen by [Pierluigi] Collina, who was appointed by Infantino to change the new FIFA from thieves and fixers, and today we saw the opposite – an old and fixed FIFA.

Maradona then turned his sights specifically to referee Geiger, who he asserted should probably stick to umpiring baseball games in the future as he has “no idea” about football.

He then concluded with a passionate defence of all Colombian football and the wounded fortunes of the entire nation itself:

England couldn’t find a way in, Colombia played how it could, with what it had, without James, without a creator.

But I screamed Colombia’s goal as though I had been the one to head that ball because it’s not possible, you have to denounce this.

As the captain of legends, I have to tell Infantino this cannot be left like this.

This is a fatal mistake for a whole country, who had lots of hopes of their team and feel let down.

Move along, nothing new to see here.