With the World Cup done and dusted for another four-and-a-half years, FIFA have announced their team of the 2018 tournament and two England players have made the grade.

There’s no space for Golden Boot winner Harry Kane, but both Keiran Trippier and Ashley Young have been given the nod at wing-back.

Hugo Lloris is in goal despite his monumental cock-up in the final, with Rafael Varane, Antoine Griezmann and Kylian Mbappe completing the four-man France contingent – no Paul Pogba, no N’Golo Kante.

Eden Hazard more than merits his place up top with the Belgian improving exponentially as the tournament went on.

Obviously it comes as no surprise that the best defender in the world, Dejan Lovren, has taken one of the centre-back berths, with Croatian teammate Luka Modric just ahead of him in midfield.

Paulinho is perhaps the most undeserving of inclusions, with Neymar running him close – in presumably as FIFA are contractually obliged to feature him in any and all of their promotional material. 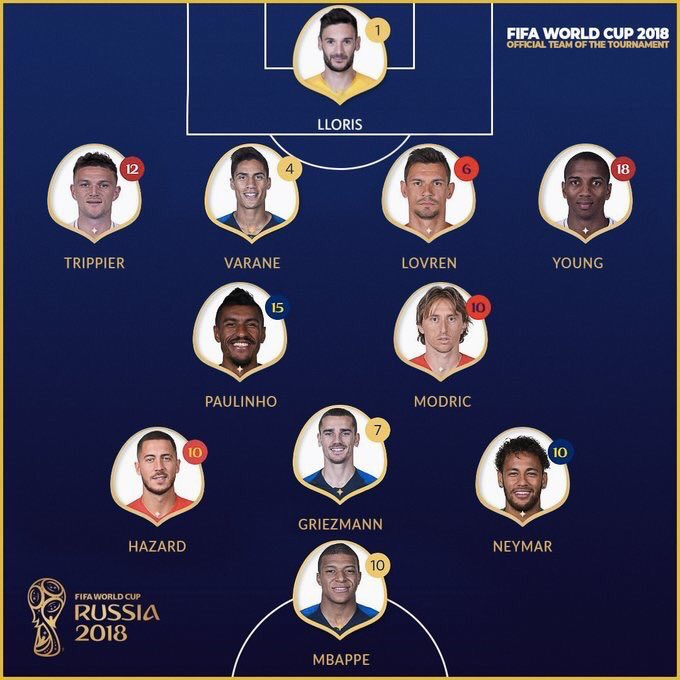 No room for the Iranian chap who attempted the 90th-minute flip throw-in (could and should easily replace Young) and nowt so much as a thank-you for Michy Batshuayi, who provided what was unquestionably the highlight of the entire World Cup.