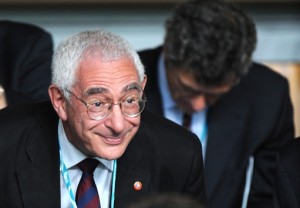 LordTriesman was chairman of the FA and the frontman in England’s bid to stage the 2018 World Cup when during a dinner with flame-haired Melissa Jacobs he revealed that he thinks players are thick and foreigners are duplicitous coves with greasy palms.

As football fan Martin Hole might say, Melissa Jacobs – she recorded the chat and took it to the tabloids – had him there. She really had him. She had him, there.

But is England’s World Cup bid over? And can the story be sued to support your own news agenda? A news round-up:

We can only hope this deeply embarrassing episode does not wreck the England bid. If it serves the wider purpose of helping to sever the unhealthy link that developed between government and our national game under Labour, it may actually do some good. For Lord Triesman, a former Labour general secretary, was pensioned off with a peerage and the FA job thanks to his party’s laddish obsession with football. Labour politicians felt they gained from close association with the game – which is also why Sir Alex Ferguson was knighted at the behest of Alastair Campbell.

Dancing In The Streets Of Moscow Tonight (Mirror)

Aleksey Sorokin, who head’s Russia’s campaign, said: “The quality of our bid leaves no other alternative for our competitors but to bring up these absurd allegations.”

While the FA chief’s allegations have caused outrage at home sections of the Spanish media believe he “may be on to something” according to top Spanish football pundit Guillem Balague.

Well, Balague writes for the Mirror. If he has news of bribery in the Spanish game, he should take it to the police, or expose it.

So was Lord Triesman guilty of saying something he shouldn’t in order to impress or is there more substance to these conspiracy theories than meets the eye?

Dunno. Why not investigate? We don’t need more speculation.

What say the Spanish? (Express)

“Is this a joke?” said Miguel Galan Torres, right-hand man of Spanish FA president Angel Maria Villar Llona.
“I can’t believe this conversation actually took place. It’s too incredible. I am astonished by these allegations. I have always considered Lord Triesman to be nothing but a gentleman. Maybe someone is inventing things and trying to set him [Triesman] up.”

For if Triesman really had one scrap of evidence that Spain were trying to bribe their way to the trophy in South Africa this summer; if he had the merest hint of proof that this was to be done with the aid of Russia, in return for Spain’s withdrawal from the 2018 bidding process, then why was he wasting the details on a bit of crumpet over dinner and not Sepp Blatter, president of FIFA, or even Interpol?

There is too much of this in football. Blithe accusations without the burden of proof. This manager’s bent, that transfer was crooked, so-and-so didn’t get the England job because . . .

Triesman put on a mock London accent as he imagined them telling Terry at the time of his disgrace: ‘You never done nothing wrong.’ Cos all of them thickos wot ’ang around wiv footballers talk like that, dun’t they, Dave? Particularly those fick Cockernees.

This little vignette is Triesman’s ‘bigoted woman’ moment, because it shows what the chairman of the Football Association really thinks of the game when he thinks the microphones are off

Jon Dillon wonder who worse it can get (Express)

If the FA are not careful, it won’t be just the 2018 campaign they are going to lose. It may also be any muscle they retain in their perpetual battle for supremacy with the almighty Premier League.

And also, control of the England team and all the lovely money it produces for the rest of the game, which one chairman, Wigan’s Dave Whelan, has already suggested.

“So he’s stepped down, which isn’t ideal. But the bid is not about Lord Triesman, it’s not about me, it’s not about David Beckham, it’s about our ability to put on a great tournament financially and leave a legacy to the world.

“So the bid doesn’t change and we can still deliver what we say we can deliver.”

Triesman, who learned about yesterday’s story during the FA Cup final, had said earlier in the week at Wembley that England’s reputation for fair play was important.

“When people say to us ‘you’re all very gentlemanly and play by the rules’ I’m afraid I can’t take that as a criticism, I would rather people knew we did it the right way and I believe we will succeed from doing it that way. People right around the world want to see it won in the proper way.”

ONCE again we are the laughing stock of world football.
The men who run our national game have once more been exposed as possessing loose morals surpassed only by even looser lips.

David Conn has sympathy for the fallen Lord (Guardian)

Richard Scudamore, the Premier League chief executive, became an implacable enemy as soon as Triesman publicly warned about the professional clubs’ £3bn debt mountain in an October 2008 speech which, courtesy of Portsmouth and Manchester United, has since been amply vindicated.

The ferocity of the criticism which then found its way into the press, much of it based on pretty thin grounds, did shock Triesman. He appeared to give up the fight, and any hope of the FA truly regulating the professional game. Instead he focused most of his efforts on the 2018 bid, believing that if the tournament could be secured, it would be his great legacy, rather than burying himself in the grim attrition of grappling the FA into a body which could govern.

It is not likely – and nor will it be until it is accepted that the great failure of English football has been its inability to create a culture of leadership from within.

So. Who will be the new broom? Alan Sugar? (Sun)

The man behind top TV show ‘The Apprentice’ says he would be happy to be hired to rescue England’s ailing 2018 World Cup bid and takeover at the helm of the English game.

Multi-millionaire Sugar added: “A couple of people have e-mailed me to say they think I would be ideal for the role and that’s given me the seed of an idea.
“I have had no contact from the FA but it is an interesting idea and everyone knows I have been a strong commentator on the state of English football.

“And it’s not as if I would be an outsider coming into the game. I do have something of a track record in football.

“Since the election I don’t have my Government role any more so it could be a case of one door closing and another one opening.”

Triesman’s stupidity was not his loose lips – his undoing was vanity and showing off to a younger woman.