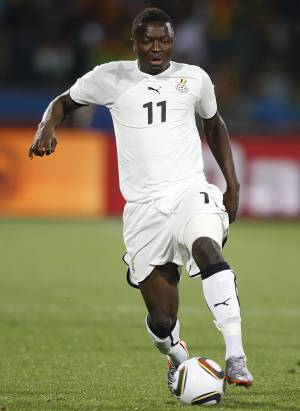 According to reports in the German (?) press, the Ghanaian Football Association (GFA) have ejected Sulley Muntari (he of the almost perfectly spherical head) from the Black Stars’ World Cup squad after insulting coach Milovan Rajevac.

The GFA have apparently reached their decision after hearing of Muntari’s dissent following Ghana’s Group D tie with Australia on Saturday.

Whereas the Inter Milan midfielder’s dismissal is yet to be officially confirmed, a statement from the GFA is expected to be released later today.

UPDATE: In one of the quickest updates in Pies history, we can now confirm that Muntari will be allowed to remain with the Ghana squad by the GFA, despite the brush with his superiors.

“We wish to state that Sulley Muntari reacted angrily and in a manner that was offensive to the team’s Code of Conduct in the aftermath of Ghana’s game against Australia at the Royal Bafokeng Stadium, Rustenburg.

He was accordingly reprimanded for his behaviour, with the player explaining that his actions were borne out of his frustration by the team’s inability to record a win.

Sulley has since recognised his misconduct and apologised to the management, technical team and playing body of the Black Stars.

The player has also reiterated his commitment and loyalty to the team and his readiness to play and give off his utmost best to the team.”