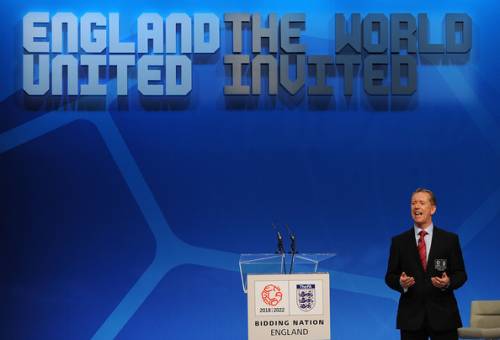 The fall-out from FIFA’s decision to chase the World Cup Gaz-ruble/Petro-dollar has begun in earnest this morning, with the English media reacting with a flurry of archetypal thinly-veiled racism, obnoxious pontification and weapon’s grade blame dispersal.

The most surprising aspect of the initial recriminations is that England’s bid leaders seem genuinely surprised that the elderly, corruption-riddled glad-hands that make up FIFA’s ExCo obviously chose to renege on their gummy promises to get behind the English cause.

Just for the record, England were eliminated after the first round of voting, securing just two votes whilst Holland/Belgium accrued four, Spain/Portugal seven and eventual winners Russia nabbed nine.

Bid chief executive Andy Anson is claiming that FIFA members lied about their votes and that the £3 million spent on England’s glowing technical report (plus a further £12 million to fund the bid itself) was now just money ‘down the drain’:

“David Dein, myself, David Cameron, David Beckham and Prince William were looking people in the eye and asking them for their vote and being told ‘yeah’. I am not sure what else you could do.

“I am not going to name names because that is not fair on individuals but clearly some people have. We thought we had more than six votes, perhaps seven or eight.

In other news, water is still wet, fire is still burny-burny-hot-hot and Sepp Blatter still shares 90% of his DNA make-up with a particularly claggy dumpling.