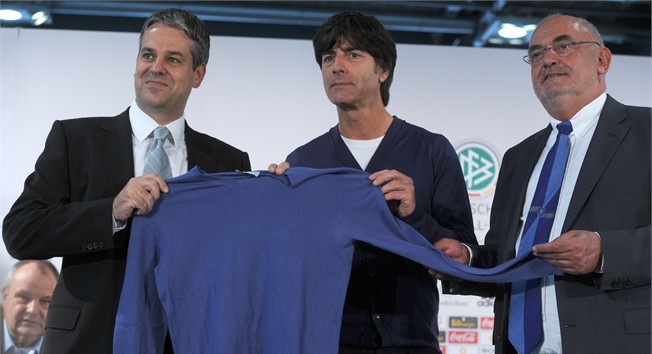 Germany coach and former 1970s catalogue model Joachim Loew has seen his lucky blue cashmere sweater sold to retail magnates Galeria Kaufhof for a cool €1 million on behalf of a children’s charity (the deal actually took place last year) and, in turn, the sweat-stained pull-over has now been donated to the DfB’s new German football museum, which is set to open in Dortmund at some point in 2014.

“I hope that the pullover will have a worthy place in the museum and will be well looked after. Maybe I will still need it to bring me luck in other tournaments.”

“Look over him well, so he gets no moth holes. Maybe we can still use it – at the World Cup 2018 in the cold of Russia!”

A little strange perhaps to refer to an item of clothing as ‘him’, but hey-ho – it almost single-handedly pulled him and his Mannschaft (oo-er missus!) through to the latter stages of a World Cup, so who the ruddy heck are we to argue?