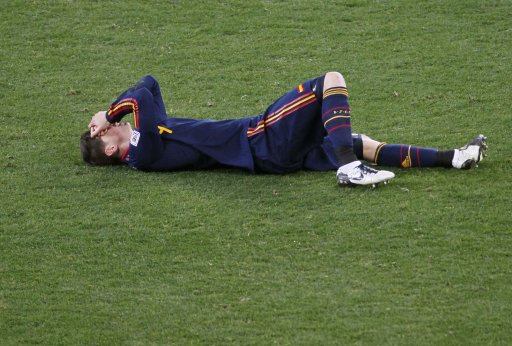 Once the blonde-haired, blue-eyed prince of Spanish football, Fernando Torres has, in the space of a year, turned into a £50 million flop.

Since moving to Chelsea from Liverpool, the attacker has seriously lost his mojo and now his impotence in the Premier League has seen him fall out of favour with World Champions Spain.

Ahead of their friendly game against Venezuela next Wednesday, Spain boss Vicente Del Bosque has decided to leave Torres out of his squad for the first time in five years.

“Torres is not in good form and we believed in this case it was better if he didn’t come.

“He is a lad we appreciate a lot and it pains me to leave him out, but I wanted to be fair – but this doesn’t mean anything. This is not a definitive list for [Euro 2012].”

So, the official line is that his spot isn’t on the line quiet yet, but surely Torres’ place at the EURO 2012 finals must now be in doubt?

Torres’ last goal for Spain came all the way in September 2010 against the mighty Liechtenstein, but his omission from La Roja is all the more crushing for the player considering that David Villa is currently out of action with a broken leg. Instead of opting for Torres, Del Bosque has chosen Sevilla’s Alvaro Negredo and Roberto Soldado of Valencia.

Here’s the squad in full: