It was with much sadness that the yellow breaking news Sky Sports scrolly thing delivered us the news that Ian Porterfield had died last night. The double-hard Scotsman was probably best known for his time as a player at Sunderland, but he was also an international and Premier League manager.
Here, then as a mini tribute to the chap, are his top 10 sporting achievements as we see it. If you have any memories of Porterfield’s reign at your particular club / country please let us know. 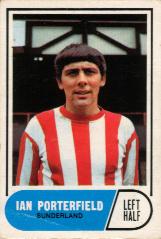 1) Scoring the winning goal for Sunderland in the 1973 cup final against Leeds.
2) Drawing with Portugal whilst manager of Armenia (seriously Armenia!) only a month ago.
3) Being hard enough to manage a Chelsea squad that had Vinnie Jones, Dennis Wise, and Stan “The Man” Ternant causing havoc in the dressing room.
4) Becoming the first manager ever to be sacked in the Premier League (an odd achievement, but hey he’s in the record books).
5) Winning Division Three with Rotherham 1980/81 season.
6) Winning Division Four with Sheffield United 1981/82 season.
7) Promotion from Division Three with Sheffield Untied 1983/84 season.
8) Starting the rebuilding the Zambian team after the tragic plane crash in 1993 that killed many of the nation’s best players
9) Winning the Korean FA Cup with Busan I’Park in 2004
10) Winning the Korean K League with Busan I’Park in 2005