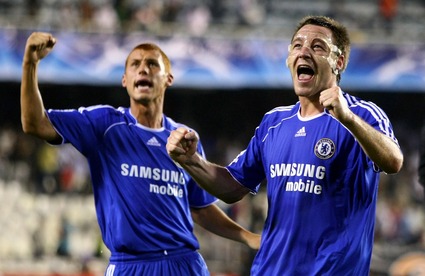 This was a pretty remarkable win for Avramovitch’s Chelski at one of Europe’s toughest places to get a result – if Jose Mourinho had been in charge, we’d all be celebrating his managerial genius.
As much as I find much to dislike about John Terry, you can’t argue with the purity of his fighting spirit, or the size of his balls: to play so soon after fracturing his cheekbone was remarkably brave â€“ no matter what anyone says â€“ and especially given that he plays in a position where stray elbows often fly.
The knives would have been out for Avram Grant if Chelsea had lost, but so far I’ve found him to be a perfectly decent manager, prepared to make bold substitutions when necessary, and also with a dry sense of humour. Maybe Roman knows what he’s doing after all?
Watch the goals after the click belowâ€¦