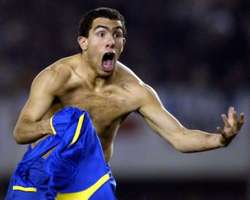 Damn, why can’t a football transfer be as simple as ‘You pay us what we want for this player and he gets to wear your shirtâ€¦’?
Carlos Tevez may have issued the de rigeur ‘Come and get me!’ plea to Man Utd (‘For me, Manchester United will be a sensational destination and to be a member of Sir Alex Ferguson’s squad will be absolutely spectacular,’ he said) but the Premier League look set to block the move, unless the whole ‘who owns Tevez?’ mess is cleared up.
The thing is, West Ham have told the League that they own the player, so therefore they stand to collect on any transfer fee. Oops.

‘While United and West Ham began talks yesterday, the Tevez side are confident no money will have to be paid to West Ham to secure his registration. They believe his three-year contract lapsed along with West Ham’s right to claim ownership when they terminated the third-party agreements in April,’ wrote the Daily Telegraph.
But the Premier League have taken this stance: ‘As far as the Premier League are concerned Carlos Tevez is registered to West Ham and any potential deal taking him away from West Ham would have to be struck with the club.’
Football365 says that ‘One possible avenue would be for West Ham to be paid a transfer fee and then agree a compensation figure with Kia Joorabchian for breaching contracts with his company Media Sports Investments (MSI) when the Hammers terminated third-party agreements following their Â£5.5million fine in April for breaching Premier League rules.’
Oh for God’s sake, another fine football mess involving an army of lawyers, who should have as little to do with the beautiful game as possible. I’m sure that all parties will find a way for Tevez to start next season in a red shirt, but I’m not looking forward to the legal jungle that we’ll have to machete our way through to arrive at that conclusion.
Radix malorum est Cupiditas