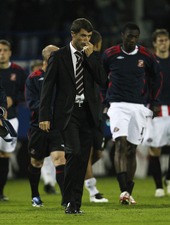 Most football fans were more than happy to leap aboard the ‘Roy Keane is God’ bandwagon after he guided Sunderland from the depths of the Championship to the Premier League in one rocket-fuelled rise. But recent defeats to Wigan and Liverpool in the league, and then Luton in the Carling Cup, will test Keane’s resolve and managerial mettle. His team hasn’t won a game since the opening day of the season, when they beat Spurs at home, 1-0. Hardly a crisis – more of a very mini crisis, with the emphasis on mini; success for Keane this season will be keeping Sunderland in the top flight, although he’d hope for slightly more than that, I’m sure.
All managers lose games, but I guess the cliche that ‘it’s how you deal with the losses’ holds true. Tomorrow, Keane takes his slightly beleaguered team to Old Trafford, his spiritual home and the place where he will surely end up as manager one day. It’s the last place you’d want to come off the back of three straight defeats, but Keane has nothing to lose. Both sets of fans will applaud him, whatever the result.
Sponsored link: Man Utd v Sunderland is available on Setanta on 01/09/07

I predicted a 2-0 defeat for Sunderland, but I’m sure they won’t go down without a fight against a Man Yoo side that has struggled to convert a decent percentage of the many chances it creates.
The absence of Wanye Rooney (still injured) and Cristiano Ronaldo (banned) is a huge bonus for Keane. If Keane was asked which two players he could remove from United’s starting XI, there’s no doubt that Roo and Ron would be near the top of his list.
Paul Scholes and Nani are the only Man Utd players to have scored in the Prem this season, so if Sunderland can do a number on them, their chances of snatching a draw increase greatly. Louis Saha could feature for the home side, but he’ll be well short of match fitness – in terms of personnel and form, this is surely a good time to play the champions. That doesn’t mean I think Sunderland will get anything out of the game though. United have too much class in every position for the Black Cats and will win. Famous last wordsâ€¦
More Man Utd stuff over at Man United Pies