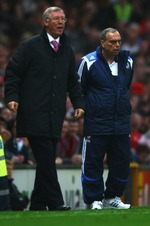 It doesn’t make much sense to me that Man Utd would complain about Avram Grant being granted dispensation to manage Chelsea without a Uefa pro licence, as reported by BBC Sport. If I was involved with Man Utd, I’d want Avram Grant to remain as Chelsea manager for as long as possible – rather that than they bring in a world-class manager like Guus Hiddink, surely? It all seems a bit silly, given that Grant has already managed the Israeli national team.
Alex Ferguson has done this before, when he opposed similar requests for dispensation on behalf of Gareth Southgate and Glenn Roeder. Fergie obviously likes things to be done by the book – but it’s counter-productive to encourage clubs to bring in more experienced managers, no?
Man United Pies and Chelsea Pies has more on both clubs