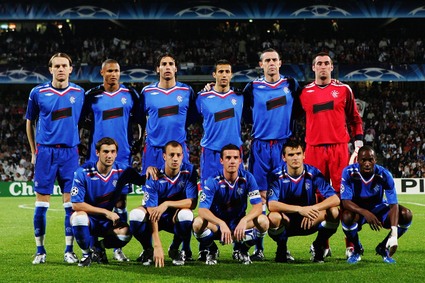 Whatever happens tonight in the Champions League, this was the shock result of Matchday Two, no question. When Glasgow Rangers were drawn in the Group of Death, with Barcelona, Stuttgart (the champions of Germany) and Lyon (French champions), I thought they stood less than a 5% chance of making it into the next round. Now, with splendid wins against Stuttgart and Lyon in the bag, they suddenly look like a proper team. I don’t know quite what Walter Smith has done, but it’s working – new signings DaMarcus Beasley and Lee McCulloch, both of whom scored last night, have settled in very well, whilst skipper Barry Ferguson continues to lead by example.
Rangers face Barca next, which will be a sterner test â€“ but who’s to say that the Scottish giants can’t now look Henry, Messi and co in the eye without fear?
Watch the goals after the clickâ€¦

Beasley’s goal, which completed the rout, came from what has to be the pass of the season so far, from the excellent Daniel Cousinâ€¦