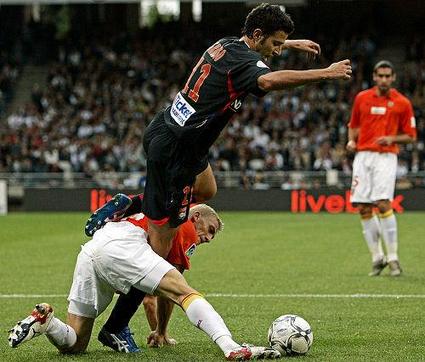 The French are often stereotyped as lazy workers, but this is totally unjustified. On to this week’s Ligue 1 round-up. Erm… all the teams had the weekend off except two of France’s Champions League representatives who took the opportunity to fulfil some fixtures. Lyon stuck three past Lens to go top of the table (albeit Nancy are level on points with a game in hand). The other match was a distinctly mid-table affair which saw Caen beat Toulousse 2-1.

Highlights of the Lyon-Lens match below:

We sense Brazilian midfielder Fabio dos Santos was particularly pleased with his goal for Lyon.

In the Champions League, the French teams had mixed fortunes against their British opponents. Lyon were embarassed 0-3 at home to Rangers, but Marseille beat Liverpool 0-1 at Anfield.