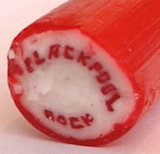 Plymouth manager and philosophical genius Ian Holloway told a Blackpool fan where he could put a stick of rock – in his ear. Ollie reacted when the Tangerines fan branded Argyle players thugs.
Holloway said: “Some complete lunatic called us thugs on the way off the pitch but I told him to go and buy a stick of rock and put it in his ear.” With most people you would assume that they had cleaned up what had actually been said, but with Ollie you never know. I wouldn’t be surprised if he actually had requested that the fan shove it up his ear. In fact, I wouldn’t even be too surprised if the fan had obliged!