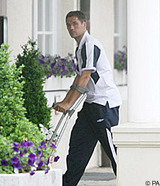 The Guardian, amongst others, reports that wee Michael Owen â€“ how England & Newcastle have missed his goals â€“ will take part in a Newcastle reserves match today against a junior team from Hartlepool United.
Owen is expected to play at least 45 minutes but it’s extremely doubtful that he will play for anything like the full 90. Should Owen come through the match unscathed, he could even figure for the Magpies against Chelsea on 22 April.
I’ve never been a big Owen fan, but I admit it would be great to see him back in action.
[More Newcastle Utd]