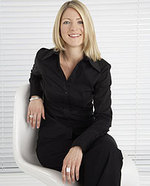 As reported in The Sun, this Saturday commentator Jacqui Oatley will take the mic for Fulham v Blackburn in the Premiership. In doing so, Oatley will become the first woman to commentate on a Saturday fixture for MotD. About time too.
You might know Oakley from BBC Radio 5 Live’s football coverage. I’ve heard her a few times and she’s good. That said, I did chuckle at a comment left by a Sun reader on the newspaper’s website: ‘Who cares what her commentary is like as long as she gets her **** outâ€¦’
I guess it’s chauvinistic views like that which explain why it’s taken so long for a woman to break through into Motty’s sheepskin world.