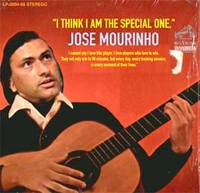 The most lovable man in football, Chelsea chief exec Peter Kenyon, has revealed the club will NOT sack boss Jose Mourinho this summer. Kenyon told Chelsea TV: ‘Jose’s got a contract until 2010 and we’re not going to sack him. He’s got the full support of the board, that’s really importantâ€¦ We’ve been linked with something like 14 managers now I think, but we’ve not got a list and we’re not looking.’
Why are Chelsea even fanning these flames? Mourinho is arguably the best manager in the world, has won back-to-back Prem titles and is still on course for a fricking quadruple. Sacking him would be a worse call than the time I drank Guinness, red wine, cider, scotch, tuwacas, lager and tequila in the same evening.