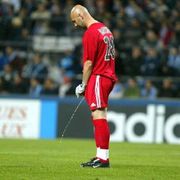 Former France and Manchester United goalkeeper Fabien Barthez has quit Nantes after being attacked by a fan while driving away from the ground at the weekend. Barthez’s car was kicked as he left the stadium following a 0-2 defeat to Rennes.
When one fan attempted to open the car door, Barthez got out to confront the fan and was involved in a tussle. The 35-year-old said: “I will not play for Nantes again. This has got nothing to do with football. I no longer feel safe there and it’s better for me to leave.”
Judge for yourself whether he deserved a beating after the jumpâ€¦