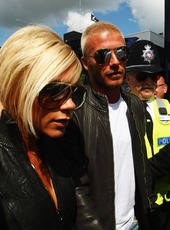 Welcome to David Beckham overkill! American sports network ESPN has announced plans to offer ‘blanket coverage’ of Becks’ US debut, ie. LA Galaxy’s friendly against Chelsea on July 21.
ESPN will show the game live in the States, with no less than 19 cameras following the action on the field and one Becks-cam trained exclusively on the man of the moment.
Prior to the match, the channel will screen a one-hour documentary called ‘David Beckham: New Beginnings’. Reggie Bush, the New Orleans Saints running back who has teamed up with Beckham for an adidas commercial, will be a special guest during the coverage.
Hmm, wonder at what stage the suits at ESPN realise that Beckham isn’t going to score five goals and dribble past every defender he’s faced withâ€¦ shall we tell ’em, or you?