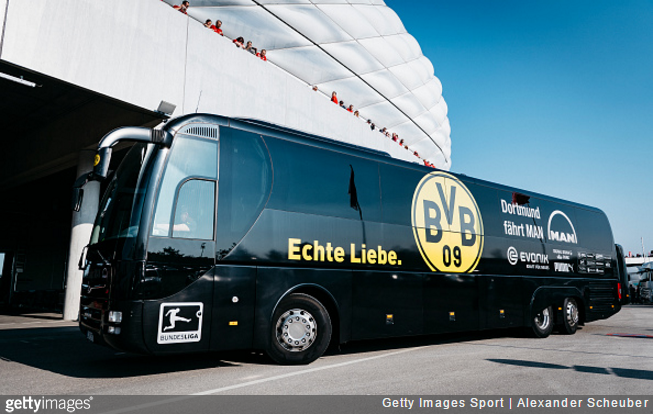 Borussia Dortmund’s Champions League quarter-final first leg against Monaco has been plunged into doubt after the Dortmund team bus was involved in an explosion en route to the stadium.

BILD then added that the explosion went off in front of the bus on Wittbräuckerstraße (a road roughly 10 kilometres from Signal Iduna Park) and that Marc Bartra was the man injured by a shattered window.

The Spanish defender has since been taken to hospital though his injuries aren’t thought to be serious or life-threatening.

Meanwhile, further details continue to leak through from the scene…

Mood has changed quite significantly here in Dortmund. pic.twitter.com/vkGP5Rplae

Been told and now confirmed: one person injured in attack on Borussia Dortmund bus. https://t.co/QCUVKFe6LN

Just been announced in Dortmund’s stadium by Norbert Dickel – incident involving the team bus. One person injured. Up on the big screen. pic.twitter.com/OEOlnr3v9d

Obviously nothing had been ascertained as to the nature of the blast, though it’s difficult not to assume the worst these days.

Here’s hoping Bartra is okay, everybody else is safe and that the match is able to go ahead as planned – though that should be of least concern.

UPDATE: Dortmund have confirmed that kick-off will either be delayed or cancelled entirely, with a decision due at 20:30 local time…

UPDATE: Sport are reporting that Bartra has been checked over at hospital and is “okay but in a state of shock”…

Bartra is OK but in a state of shock https://t.co/CvkWjFiywC

UPDATE: We’d now had official confirmation that the match has been cancelled and will be replayed tomorrow at 18:45 local time…

UPDATE: Dortmund have personally thanked Monaco’s travelling fans for chanting their name in a show of unison…

Thanks for your patience and understanding and the “Dortmund! Dortmund” chants, dear supporters of @AS_Monaco_EN! pic.twitter.com/Gcz9XGQY0J

UPDATE: Reports are filtering through that the explosion was caused by a “large firecracker” and that Bartra was subsequently taken to hospital with “superficial cuts” on his arm…

According to reports, a "large firecracker" went off and shattered the glass. Defender Marc Bartra taken to hospital with cuts on his hand.

We’ll endeavour to bring you more details as and when we have them.