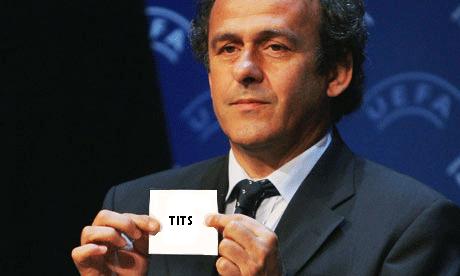 The balls for the Champions League quarter-final draw have just been extracted from the silken pouch (or perspex goldfish bowl) of fate by Gary Lineker himself, and the results are as such…

Being the diligent chaps they are, UEFA also drew lots for the semi-final draws, which look like this…

Semi Final 1: Real Madrid or Tottenham vs Barca or Shakhtar
Semi Final 2: Chelsea or Man Utd vs Inter or Schalke

Semi-final first legs to be played on April 26th-27th, second legs on May 3rd-4th.

Whichever side progresses through from Semi Final 1 will be considered the ‘home’ team for the final at Wembley.

Pies says: With the prospect of an ‘El Clasico’ semi, we cannot have an all-Spanish final. We can, however, look forward to the possibility of an all-English final.

In fact, an all-London final at Wembley is also a possible permutation, meaning that the old ‘no London-based club has ever won the Champions League’ statistic could be toppled by 28th May.

After what has already been a remarkable maiden run in the tournament, Tottenham have bagged themselves yet another glamour tie against the nine-time champions Real Madrid and, with the second leg being at White Hart Lane, they have a fighting chance of pushing past Mourinho and his blanco-clad cronies.

So, down to brass tacks. Pies are tipping Madrid, Chelsea, Shakhtar (we’ve got a tenner on them) and Inter to make it through to the last eight.

Fancy a stab yourself?