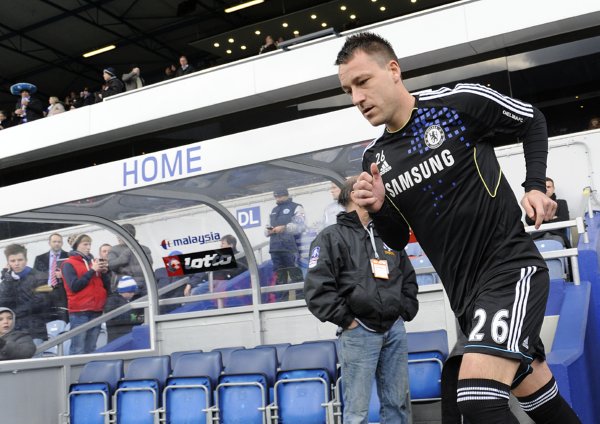 The following is copy-and-pasted verbatim from a Chelsea forum, in which former Chelsea youth player Sam Tillen – who now plays his football in Iceland – writes candidly about his experiences as having John Terry as his club captain during his formative years.

I’ve no idea when it dates from, but the article has been translated directly from Icelandic so it may not scan properly in places. That said, it’s perfectly legible and presents Terry in a rarely acknowledged light. It may just add another dimension to your monochrome view of a man so often vilified by all and sundry (hands up, Pies have been as guilty as anyone else on that front on occasion)…

As football fans, we don’t get a lot of opportunities to judge a player’s persona, all we get is stuff from the newspaper and other medias and of course how the player acts on the football pitch. It’s normal that our feelings towards them are based on those things, since we don’t know them personally. But unfortunately this can be very deceiving.

Sometimes reporters can have a lot of propaganda. They could have had an argument with the player, be friends with his ex-wife or support a rival club. When a player steps on the field on a Saturday the whole world watches him play under the pressure of his life. Players, managers and supporters have all been waiting for this moment – kick off.

It’s abnormal to judge people’s behaviour under these circumstances. Do you think that when Gary Neville wins a game of hide and seek with his daughter he yells at his wife “Come on!!!!” while he holds on to his shirt like he did in front of Liverpool supporters at Old Trafford? I think not.

When you are around the training ground you get to see the players in their true form. Some of them surprise and charm you while others dissappoint you. This would also be the case if you meet someone in real life. The fact that footballers are famous does not make them any different. They just have talent in a specific field just like doctors or architects. Some of them are good people, others are not.

The year 2002, I was 17 and had been injured for eight months. I usually had to train twice as much to be in form. I trained with several players during rehabilation and since John Terry was facing injury as well I trained a lot with him. We trained together for three or four weeks before he began to play again and prove himself as the number one center-back in the first team.

After this, John always observed how I was doing with my injury and he wished me good luck for my first game after 11 months of rehabilation. Unfortunately in that first game I got heavily injured again and had to go to surgery three days later. When the physio came to visit me he said that ‘JT’ had asked if I could get vacation and he even asked Graeme (Le Saux) if they could use the ‘discipline fund’ (money collected if a player comes to training late and such) from the first team to pay for my vacation. I couldn’t believe it.

After staying home for ten days, I went to the training ground and John was there. He asked how I was doing and then said “Me and Graeme have arranged for you to go to a vacation, you can go wherever you want, with your friend or your brother, you deserve something good. Just think about where you want to go, this isn’t your money! Just let us know how much it costs and we will arrange it.

I didn’t know what to say other than ‘thank you’. I talked to the youth and reserve coaches and they told me it was probably best for me to take the vacation. One of the reserve coaches said that I still had that ‘hospital color’ because I was as white as a ghost. I lost a lot of blood in the surgery and it showed in my face.

My mother had also just had surgery so she could use a a little break from work. That’s why I wanted to take her with me. It was October so I needed to find ‘some place hot’ like John advised me to do.

The one place close that was hot enough was Southern Spain and because this wasn’t my money I didn’t want to take advantage of the generosity from John. So, the next day during practice I said to John “Is it okay if me and my mother go to Sevilla over the weekend?”

His answer was, “Come on Tills! You can go wherever you want for free, why do you want to go there? It won’t even be hot. Look at it again, go to the Caribbean or something, you can sit at the beach without having to worry how much it is going to cost, we will make sure of it.”

So I went and checked again and found a good offer for a trip to Tobago. I talked to my physio for a few days and he said “It’s fine, just talk to JT.” I still felt for bad spending other people’s money, I had never done that before. So naturally I was a little nervous when I was talking to John, telling him about the trip I had in mind.

And what did John say? “No problem, good choice! Just give me the info and we’ll pay it.” He arranged everything and the day before I was leaving for the trip he called me over in the dressing room. “Tills, your going tomorrow, right?” He went to his pocket and took out £100. “Here, some pocket money to spend”. I said that I couldn’t accept it. He asked again and again I refused. Then he stood up and said “you’re not going anywhere until you accept this!”. I had no choice.

When I came back from the trip, I was renewed and a large part of the reason was that I was finally ready to play football again, 6 months after my surgery.

In my first game after the injury (in the youth team) we were playing Crystal Palace at our training ground. The first team wasn’t suppose to have training until 3pm but our game was at 10am. John came to see me play, 5 hours before his training. He came just to see if I would get through the game, which happened. He certainly didn’t have to do that, but he did.

When by brother Joe was in the youth team, John paid for driving lessons for every single player in the youth team because he knew how expensive it was when you only get £80-a-week in wages. The youth players just had to tell him how much it cost and John paid it the next day.

At that time, when the youth players were cleaning the first team players’ boots, everyone wanted to get one of the ‘sharks’ – John, Frank Lampard, Jody Morris, etc – because they gave the highest christmas bonuses. Some players didn’t give any bonuses even though the youth players had cleaned they’re boots for six months.

John didn’t only give high bonuses, but he even paid for the youth players fines if he thought they were being treated unfairly. Of course, he told them not to tell a soul.

John has never forgotten what it was like to be a player in the youth team and he is the perfect captain. He was always available if you wanted to talk to him. He always asked every youth player how they were doing in the team. If he heard that you played well in a match, he congratulated and encouraged you. He really had an interest. He never forgot the young players.

He was always monitored the youth players, including me. For instance, he found an agent for me that I signed with. When youth players traveled with the first team he always made sure that they got their bonuses, that made a lot of difference in their paychecks.

He helped them adapt and welcomed them into a new environment. On the pitch and the training ground he was magnificent, he had an heart like a lion. He trained after practices, always did that little extra. We really looked up to him.

It wasn’t just the youth players either. There are endless stories of his kindness and generosity, stories that never left the training ground. One of them stands out: We had an old masseuse called Al. One day his car broke down for good. He said that he couldn’t attend training sessions anymore because it was very difficult for a man of his age to use public transport.

One day after practice, John told him to go to the parking lot and close his eyes. When he opened them he saw a brand new car. John had asked every player in the first team to chip in to buy Al a new car. The old man started to cry. This all happened before Roman Abramovich and before John was a superstar and started making big money.

Last year Al got seriously sick and had to be in a hospital. When John found out, he immediately contacted him. Al was flattered to hear from him, and his wife was delighted that John had taken the time to think about him. John visited Al regularly until he passed away and John, of course, attended his funeral.

Marcel Desailly – the Chelsea captain before him – didn’t do anything like the things John did. He couldn’t care less about the young players or anyone else in the club for that matter.

As a player he was impeccable, but as a captain he did nothing and wasn’t even close to what John is. In my first and second year in the youth team it was our job to get signed shirts from players from the first team, those shirts where then sent to fans or to a charity.

We all stood in a row in the hallway before practices when the first team players walked passed us and then they signed the shirts. When Mr. Desailly came, he usually pretended to be on the phone so he didn’t have to do anything. We were like “Marcel, uuuuuumm, Marcel, could you please…..” and then he was gone. Disappointment.

Some players cause you a lot of disappointment when you meet them personally. They also do that in daily life. John has, of course, had a few problems off the pitch that have gotten a lot of press, but I will always remember how he treated me when I was a teenager.

No one else would have done that or even thought about doing it. He is no saint, but there is a reason why Chelsea fans, players and staff look at John Terry as a real leader.”

Cockle warming. Take from that what you will. I’m sure it won’t go along way to adding any perspective or depth to the vast majority of people’s opinion of the man, but it’s certainly refreshing to hear Terry’s name mentioned in a positive context once in a blue moon.

Spotted on The Shed (Via the talkchelsea forum)