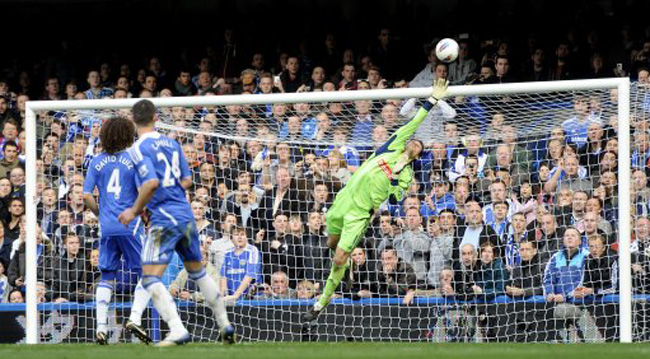 Despite playing against 10 men for the majority of the game, Roberto Di Matteo’s Chelsea side struggled to break down a trademark hardworking Stoke perfomance at Stamford Bridge.

The home side started impressively but the Potters stood firm, even fashioning a chance for themselves, courtesy of Jonathan Walters who was ultimately foiled by Gary Cahill. However, Stoke’s task was made all the more difficult just before the half-hour mark, when Ricardo Fuller lost his head and stamped on Branislav Ivanovic after a minor ‘coming together’.

The hot-headed striker was duly sent off, but Tony Pulis’ side continued to keep out Chelsea, with Di Matteo introducing Juan Mata into the action before half-time.

After the break the Blues continued to dominate as Stoke defended deep, but eventually some superb play from Mata on 68 minutes set up Didier Drogba, who rounded Asmir Begovic and slotted home to give Chelsea a vital three points.

That goal was Drogba’s 100th in the Premier League and it moved his side level on points with Arsenal as the race for a top four place intensifies.  As for Stoke, they stay in the comfortable environs on mid-table after another commendable display.