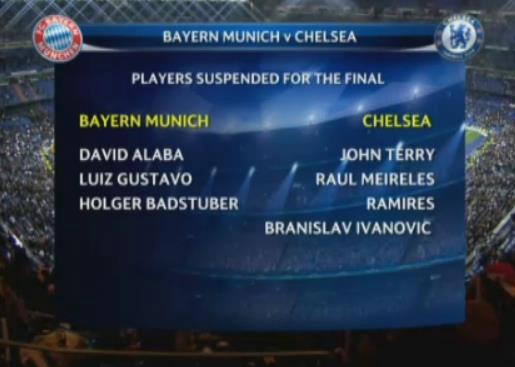 Would you just look at that? Six players cruelly denied of playing in the biggest games of their club careers for the heinous crime of having picked up three bookings in the dizzying maelstrom of the Champions League knockout phases – John Terry being the only dolt present who actually deserves to miss out given his conduct.

You see, while FIFA introduced an amnesty rule two years ago to ensure that players shown a yellow card in the World Cup semi-finals would not miss out on the final, and UEFA swiftly followed suit in the European Championships.

However, Platini’s mob haven’t yet got around to applying the same rules to the Champions League. Therefore the tournament doesn’t have a yellow-card amnesty after the quarter-finals – meaning players can still rack up that fateful booking over the course of both legs of the penultimate fixture.

Christ, it still breaks my heart to see footage of Laurent Blanc lifting the World Cup in his tracksuit bottoms back in 1998 then passing it on down the line almost completely devoid of the manic elation he was entitled to be feeling at that moment.

(To pep your memory; Blanc was red-carded after Slaven Bilic feigned an elbow and went down like a raized tower block in the semis (the first and only dismissal of his entire career) and so, after playing like a demi-god for the entire tournament, Blanc had to sit out the biggie while his compatriots did the business against Brazil in Saint-Denis.)

It’s akin to when Roy Keane and Paul Scholes missed out on all of 1999’s festivities on that balmy night in Barcelona, Darren Fletcher suffering likewise a decade later – along with a fair old smattering of other such unfortunates.

Of course, it’s easy and probably preferable to blame the system and not take personal responsibility for your card-count. You could perhaps argue that someone on the Chelsea staff should’ve informed Branislav Ivanovic of his situation before Sky Sports’ Santa Myth Debunker in Chief Geoff Shreeves took the opportunity.

Indeed, many write it off as ill-disciplined stupidity or sporting misfortune, but that doesn’t make it any less heart-wrenchingly cruel and callous to see a player denied of a Champions League final by such legislation – especially considering some of the prissy things that are deemed yellow-worthy in this day and age.

Bayern’s Luiz Gustavo didn’t commit a yellow-card offence all night in the Bernabeu, he just made Mesut Ozil fall on his arse one too many times; Meireles complained to the referee; Ivanovic was booked for scuffing the penalty spot before Messi’s botched penalty. In short, none of the six committed offences that were worthy of putting them out of the final – except Terry, and even that’s debatable.

UEFA argue that a yellow card amnesty in the latter stages would remove an element of discipline from the last four but these guys have strived for this moment, why rob them of a glorious memory for the sake of a flash of hot-headed dissent or an inadvertent trip?

Seems entirely senseless to me.

What do we think folk? I’m fairly sure I can guess…