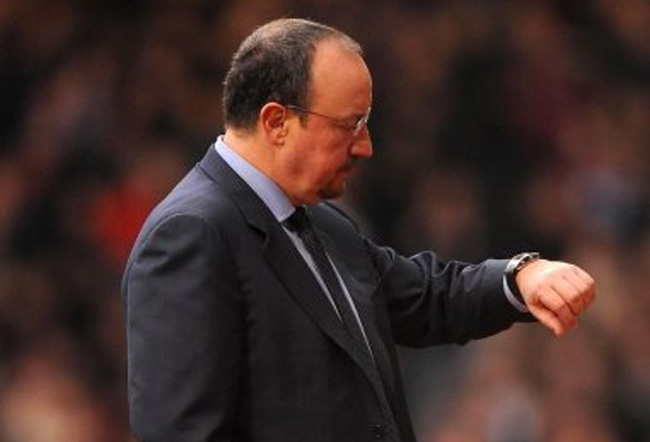 No stranger to a tetchy rant or two, Chelsea boss Rafa Benitez publicly criticized both the Blues and their fans over their behaviour during his tenure at Stamford Bridge.

Speaking after his side had strolled past Middlesbrough to reach the last eight of the FA Cup, the Spaniard had a pop at Chelsea’s decision to label him as an “interim” boss. He said:

” Chelsea gave me the title of interim manager which is a massive mistake. I’m the manager.”

“I have been in charge in football for 26 years. I have won the Champions League, won the FIFA Club World Cup, the FA Cup, the Italian Super Cup, the Spanish league twice, nine trophies, all the trophies you can win at club level.”

The former Liverpool boss then took aim at a section of Chelsea fans who had made their opposition to the Spaniard’s arrival at Stamford Bridge clear from the start. He said:

“The fans are not helping us. At the end of the season I will leave. They don’t have to worry about me.”

“I am a little bit disappointed with some of the fans. They have to support the team instead of wasting time singing songs.”

“If they continue singing and talking, they are not doing (the team) any favours. I will do my best until the last day.”

One wonders if he’ll still be ‘interim’ manager of Chelsea come the weekend, no matter the end of the season.

But was Benitez justified in having a go at the club and the fans? What do you guys think?

Oh, and here’s a snipper of the press conference for your perusal…