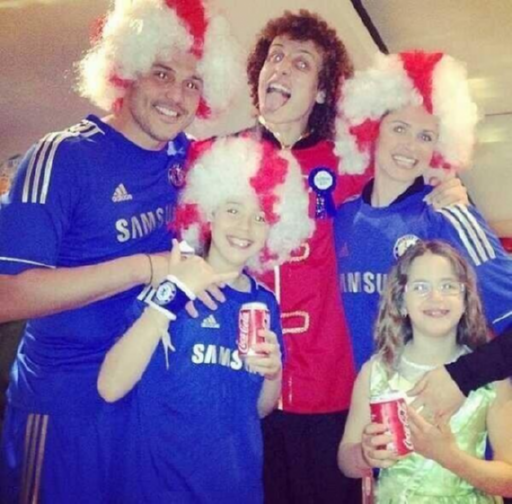 The media bods at QPR are not happy bunnies at the moment after a photograph of goalkeeper Julio Cesar decked out head-to-toe in Chelsea colours was circulated yesterday.

It won’t surprise you to learn that it’s all completely innocuous, as Cesar and his wife Susanna Werner were merely attending good friend David Luiz’s fancy dress birthday party dressed as David Luiz, while the man himself – along with good buddy Ramires – came as Chelsea pensioners.

Werner then uploaded a few photos of the party to her Instagram account, but the shot of Cesar in a Chelsea strip had QPR’s head of communications, Ian Taylor, in a lather – writing later on Twitter:

“The club is aware of an image of Julio Cesar circulating on social networking feeds.

“The image, which appeared on an Instagram account, has since been deleted. The club will be dealing with this issue internally.”

Cesar has also had to issue a statement on the club’s official website, stating:

“I would like to clarify that last night I attended David Luiz’s fancy dress birthday party and, as a joke for my friend, my family and I dressed as him.

“I want to assure everyone that absolutely no offence was intended.”

Quel est le probleme QPR? Why you so mad?

Any road up, here’s how the rest of the gang turned out: You’ve got Paulo Ferreira as Robin (like JD from Scrubs, he’s still the sidekick even in his own fantasies), Nathan Ake as Superman, Demba Ba as ‘Cool American Jacket Guy’, Marko Marin as Breckin Meyer as Robin Hood and, down there at the front, Oscar as Fernando Torres… 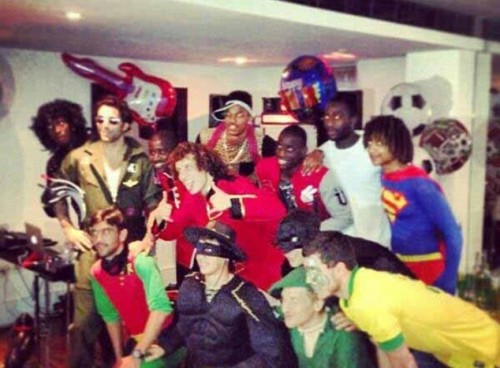 And a thoroughly good time was had by all, with lashings and lashings of ginger beer.