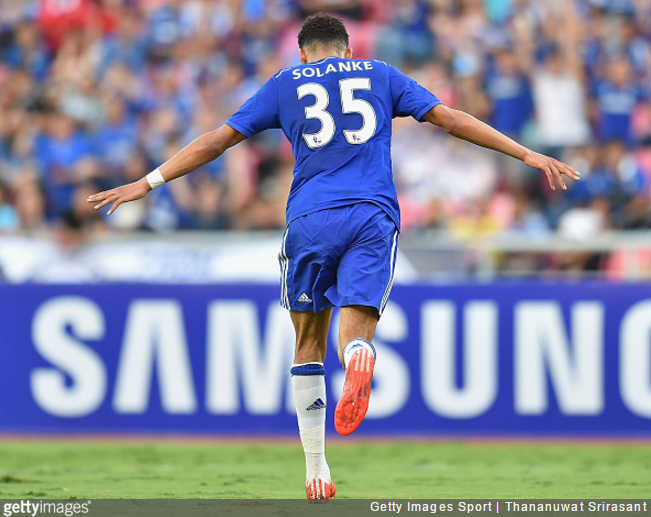 Coming on the very same day that Juan Mata decried the “obscene” amount of money that footballers get paid, Chelsea youngster Dominic Solanke has popped his head above the parapet and demanded that the club shovel him £50,000-a-week.

Solanke is an 18-year-old striker with a grand total of 17 cumulative minutes of Chelsea first-team football under his belt. He is currently on loan at Vitesse Arnhem (seven goals in 24 appearances), just like all the rest of the Blues’ academy fodder.

According to several sources, including the Telegraph, Solanke’s Chelsea contract is due to expire in 12 months and talks over a new deal have “hit an impasse” over his exorbitant wage demands. He’s also seeking first team guarantees after failing to make much headway during his two years on the books.

The youngster’s stepfather has been handling negotiations on behalf of his son and stunned the Blues with an ambitious list of requirements that he has claimed need to be met for Solanke to sign a new deal.

The Telegraph also report that Solanke is currently on a professional contract at Chelsea, signed in September 2014, that is worth £7,000-a-week.

If Chelsea actually cave and agree to his demands, he’d be earning as much as Harry Kane (the Premier League’s top goalscorer) does at Tottenham at the moment.

While it’s incredibly easy to scoff at an entitled urchin chasing undeserved riches, we imagine that Solanke – or more specifically, his step-dad – is attempting something of a power play here.

Having woken up to the fact that his chances of making the first team at Stamford Bridge are slim to none, Solanke is attempting to either force Chelsea’s hand into letting him have a stab in the senior side or, worst case scenario, secure himself vastly inflated wages while he bides his time, slowly congealing in the academy set-up for the next few years until he moves to West Brom.

Either way, it’s all thoroughly depressing. What happened to the pure joy of playing the game you love for a living?