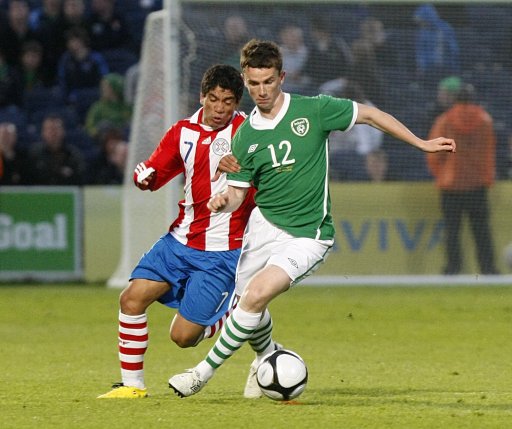 Having already had to deal with the trauma of relegation from the Premier League, poor old Wolves full-back Kevin Foley is now having to handle the heartbreak of missing out on Euro 2012. The 27-year-old had been expecting to travel to Poland and Ukraine as part of Ireland’s squad after apparently overcoming a hamstring injury. However, the defender was stunned to learn that he had been axed from Giovanni Trapattoni’s squad, with the versatile (but not very good)  Paul McShane taking his place in the 23-man squad.

Foley had been named in Trap’s initial squad, but with injury concerns over both John O’Shea and Darren O’Dea, the Italian coach decided not to risk Foley after his hamstring niggle. McShane’s ability to play both in the centre of defence and at full-back also influenced the decision. Understandably, Foley is not a happy bunny. He said:

“I wanted to prove a point, that I was fit to play because from what I understood, I could have trained last week, Thursday, Friday and been involved in the game (versus Bosnia on Saturday).”

“He (Trapattoni) said there was no rush and we will wait to train in Italy, so I trained for two days in Italy and felt great. And then all of a sudden, he pulls me this morning just before the end and says, ‘You are not in the squad’, and that is hard to take.”

“I have done everything I can. That is all I can do. Words can’t really describe it. It was tough. The lads have been great, but what happened happened, there’s nothing I can do about it now. I hope the lads go on and do as well as they can from the tournament.”

With Foley now 27, he may not get many more (if any at all) chances to play at a major international tournament. However, to claim he was ‘betrayed’ is maybe a tad extreme. Although to be fair to him, I be pretty peeved if I was replaced by Paul McShane myself.