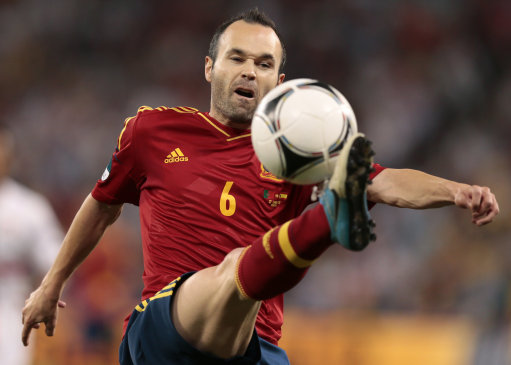 He of ghostly palour and lightning-quick feet, Andres Iniesta, has been named by the player of Euro 2012 by the UEFA bigwigs after a starring role in La Roja’s third major tournament triumph on the bounce.  I don’t think there’ll be too many dissenting voices on this one, with arguably only Azzurri star Andrea Pirlo, Portugal numero uno Cristiano Ronaldo or Spanish defenders Jordi Alba and Sergio Ramos deserving of the award.

Anyway, on a positive note for England, none other than Three Lions’ captain Stevie G has been named in the team of the tournament after the Liverpool man played a disciplined yet creative role in England’s decent enough campaign. (what, no James Milner!?)

See the full list below. Personally I’m not convinced Sami Khedira was that great. Anyway, debate away!