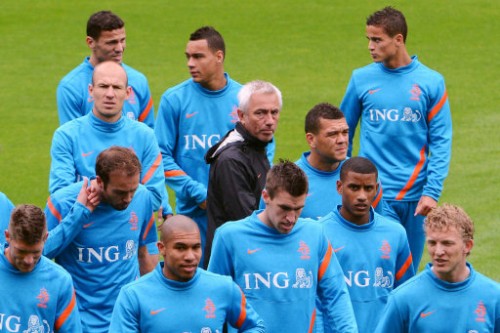 Holland captain Mark van Bommel has implored UEFA to ‘open their ears’ after complaining that the Dutch squad were subjected to racist abuse and monkey chanting during an open training session in Krakow, Poland yesterday evening.

Unsurprisingly, UEFA have refused to acknowledge the abuse was of a racist nature – instead claiming that the unrest among the 20,000 present at the Stadion Miejski (where Holland were training) was due to a protest being staged at the by local fans who were angered by the fact that Krakow hadn’t been given any Euro 2012 games.

“Open your ears. If you did hear it, and don’t want to hear it, that is even worse. It is a real disgrace, especially after getting back from Auschwitz, that you are confronted with this.

“We will take it up with UEFA and if it happens at a match we will talk to the referee and ask him to take us off the field.”

“As [Holland] were doing a lap on the pitch, around 500 of the local fans started doing monkey chants at the black players.

“It became worse on the second lap, at which point Van Bommel took the players to the other side of the stadium. It’s the only story in the Dutch press today.”

You’ll be glad to know that we’re hearing UEFA have ‘no plans’ to launch an investigation into the abuse at Stadion Miejski (consistency is key when dealing with matters like this) and Holland are not going to be making a formal complaint – presumably as it’s just not worth their while, especially on the eve of a major tournament.