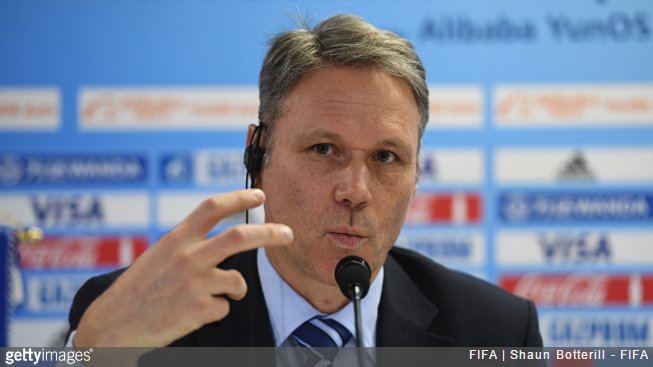 In his role as FIFA technical director, Marco van Basten has cobbled together a list of tweaks that he believes will help preserve football as the world’s number one sport of choice.

Sadly, it appears that Van Basten has been at the strong cheese before bed-time, as some of his suggestions are bordering on the crackpot.

Front and centre are his musings on the offside rule, which he posits could be scrapped entirely to ensure that more goals are scored during matches.

I think it can be very interesting watching a game without offside. Football now is already looking a lot like handball with nine or ten defenders in front of the goal.

It’s difficult for the opposition to score a goal as it’s very difficult to create something in the small pieces of space they give you.

So if you play without offside you get more possibilities to score a goal.

Van Basten has also proposed that players be restricted to appearing in 60 games a year to help prevent burn-out, as well as an orange card being introduced to signify 10-minute sinbins for middling infringements.

He also reckons that getting rid of extra time and instead introducing ‘American-style penalty shootouts’ – i.e, penalties with an eight-second run-up, as favoured by the NASL in the 1970s/80s – might make the prospect a little more entertaining for fans:

Maybe the player should start 25 metres from goal and then you can dribble the goalkeeper or shoot early.

But you have to make a goal within eight seconds. It’s more skill and less luck.

Y’know, this kind of thing…

Van Basten was keen to stress that his ideas are rooted in helping to level the playing field and helping preserve football as a sporting venture, rather than a business one.

We should not just let the game be organised by those with the money. The big clubs like PSG, Manchester City and Real Madrid who have everything.

In football you need opponents, competition because if you are alone with two or three clubs controlling everything you don’t have any competition.

Of course, any changes would have to be discussed, tested and verified by the International Football Association Board before coming to fruition, but it’s got to be a good thing that Van Basten is at least trying to stimulate debate.

And, for the record, Pies are all for American penalties.